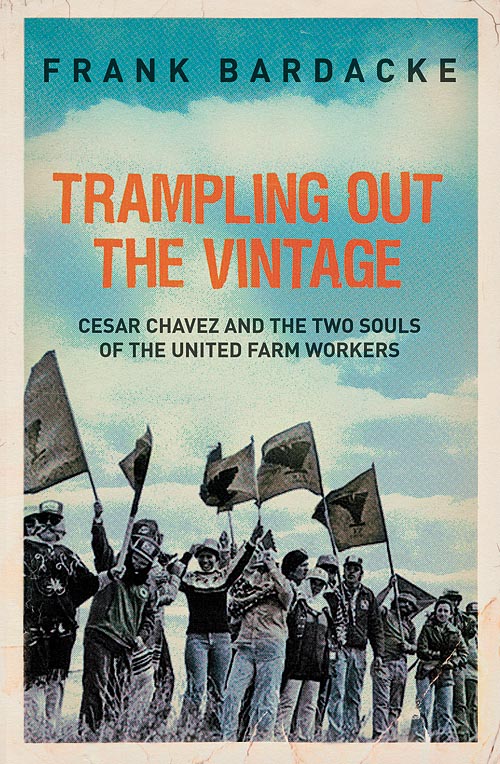 A dramatic new history of Cesar Chavez and the rise and fall of the United Farm Workers.

The slogan “Yes we can”—in the form “¡Sí Se Puede!”—doesn’t originate with Barack Obama’s 2008 presidential campaign. It goes back more than four decades to the heyday of the United Farm Workers, an organization that at its height won many labor victories, secured collective bargaining rights for California farm workers and became a major voice for the Latino community, which was previously excluded from national politics. The UFW was once a transformative political force of a kind now largely lost in contemporary America.

Trampling Out the Vintage is the authoritative account of the rise and fall of the United Farm Workers and its most famous and controversial leader, Cesar Chavez. Based on many years of interviews—with farm workers, organizers, and the opponents and friends of the UFW—the book tells a story of collective action and empowerment rich in evocative detail and stirring human interest. Beginning with the influence of the ideas of Saul Alinsky and Catholic Social Action at the union's founding, through the UFW’s thrilling triumphs in the California fields, the drama concludes with the debilitating internal struggles that left the union a shadow of its former self.

A vivid rendering of farm work and the world of the farm worker, Trampling Out the Vintage is a dramatic reappraisal of the political trajectory of Cesar Chavez and the United Farm Workers and an essential re-evaluation of their most tumultuous years.

“Bardacke is a talented writer, burning with rage against injustice, and his subject is one of the most attractive and charismatic figures US politics has produced.”

“[M]agnificent and tragic history… Bardacke’s enormously insightful and nuanced book thus radically reconfigures the social, political, and moral narrative with which most Americans have understood the history of the farm worker movement and its leadership.”

“[T]he first comprehensive history of the rise and fall of the UFW, written from the viewpoint of the farmworkers who vitalized the movement known as ‘La Causa.’”

“The best history ever written of the United Farm Workers (UFW) and Cesar Chavez. Certain to become a classic of U.S. working class history.”

“Frank Bardacke has written the comprehensive history of the United Farm Workers, a definitive biography of Cesar Chavez and a magnificent guide to the politics and sociology of the 1960s-80s. Deserves #1 ranking as best labor history of the year.”

“A radically honest, uncompromising and often painful deconstruction of the legend of Cesar Chavez, Trampling Out the Vintage is one of the long-awaited books of our time. Having spent almost a decade as an agricultural worker in California's Pajaro Valley (where he still lives), Bardacke’s account evokes the spirit of Steinbeck, resurrecting the true heroes of La Causa—the rank and file fieldworkers—and reminding us that the grapes of wrath still remain to be harvested for social justice.”

– Mike Davis, author of Planet of Slums and City of Quartz

“Trampling Out the Vintage is the view of a well- informed observer who worked in the lettuce fields near Salinas for six seasons, then spent another 25 years teaching English to farm workers in the Watsonville, CA area. His views on the growth and decline of the United Farm Workers union – some of which I do not share– offer important points of history and reflection for unionists today, particularly those working with the Occupy Wall Street movement...provides several insights not previously developed in well informed books on the UFW.”

“Bardacke is a top investigative reporter with a refreshing clarity of style who employs the careful documentation of a trained historian.”

“[T]he most complete account yet of the rise and fall of the UFW. It is also an epic, Shakespearean drama with all of the elements of a Hollywood blockbuster. Bardacke masters an enormous amount of material to relate these events skillfully. He salts his prose with stories and characters straight out of Steinbeck.”

– Marty Manley, Jam Side Down

“There's so much marvelous stuff in Frank Bardacke's book that's simply not been done before. At the book's core are the men and women who pick the crops in California's fields and orchards. Bardacke gives those people, mostly seen only in distant fields, a huge presence, one crackling with political vitality: those surges the UFW had no idea were coming; those moments when a strike spread like wildfire across the fields. Here are the farm workers, their skill and endurance, the world they built among themselves, the ways they shaped the history of the UFW. It is their story—refreshingly, sympathetically, and beautifully told—that makes this book stand apart and will make it stand forever.”

– Alexander Cockburn, coauthor of Whiteout: The CIA, Drugs and the Press

“Frank Bardacke's long-awaited masterpiece has finally arrived, and it's the kind of book that comes along only once in a generation, if we're lucky. Not only is the research spectacular, but Bardacke has a rare ability to combine a nuanced analysis of the United Farm Workers as a social movement with a mastery of the political economy of California agriculture. Best of all, he's a superb writer, who's constructed a gripping tale full of complex characters including Catholic activists, community organizers, Chicano youth, Filipino veteran activists, white liberals, the ever-enigmatic Cesar Chavez, and most importantly, rank-and-file farmworkers themselves, who finally enter the story of the UFW as savvy and opinionated activists with their own vision of empowerment Bardacke makes you feel the exhilaration and challenges of the UFW story at every turn.”

– Dana Frank, Professor of History at the University of California, Santa Cruz

“It is the human beings that come alive here—union officials, organizers and workers—with their foibles, rivalries, and triumphs. We should not be surprised to learn that beyond his saintly portrayal, the singular and remarkable Cesar Chavez emerges as a hugely complex individual with a full range of all too human traits. An extraordinary book about an extraordinary movement and man, and a story as inspiring as it is tragic.”

– Douglas Monroy, author of The Borders Within: Encounters between Mexico and the US

“In the era of so many book-a-year authors, Trampling Out the Vintage has a lifetime-achievement feel...[It] skillfully tells the dramatic story of the rise and fall of the UFW, but what makes this a landmark book is its emphasis on the rank-and-file leaders, who are too often obscured by the long shadow cast by Chavez. It is these workers who are the heroes of Bardacke’s book—workers whose leadership was essential to the union’s success, and whose betrayal contributed to its eventual demise.”

“If you buy one book this year, the book you won’t go wrong paying cash money for is Frank Bardacke’s just released Trampling Out The Vintage, the first book I’ve read in years that lives up to every pre-release superlative applied to it. It got me right from the first page, and it’s been years since I read anything that has captured my scattered attentions so thoroughly as this history of the United Farm Workers—not that “history of the United Farm Workers” even begins to describe this riveting book’s fascinating contents. If Bardacke had introduced himself as Ishmael and proceeded to write in the first person we’d be talking about a novel right up there with Moby Dick. Trampling Out The Vintage is not only the best all-round book ever written about farm labor that I’m aware of—and I’ve read all of Carey McWilliams and the rest of the “Factories in the Fields” books—this one is the kind of true history that reads like a great novel, with a large cast of fascinating and often improbable characters, plus the first detailed descriptions of farm work ever written, and intimate portraits of large figures like Cesar Chavez, Dolores Huerta, the late Walter Reuther, the Kennedys, Chuck Diedrich and the so-called human potential movement, Catholic mysticism, campesino theater, and on and on. Everything related to this great movement is in this book, including its entirely readable history of farm labor struggle pre-dating Chavez. Bardacke, fluent in Spanish and a former farmworker himself, has devoted his life to Trampling Out The Vintage, and he really has achieved an absolute masterpiece—an accessible masterpiece, too—not a dry history that has you nodding off at the introduction (Bardacke’s intro is worth the price of admission by itself) and dead asleep a couple of pages in. If you think I’m wrong about it I’ll refund your purchase price. [Chosen as Best Book of the Year.]”

“In his superb new book Frank Bardacke reports that by the 1970s, UFW organizing had gotten so strong that wages on some highly skilled farmworker crews earned $12 per hour—'more than 48 dollar in today's money. Even the lowest-paid field workers in the late 1970s made more than one and a half times the minimum wage.'”

“[A] detailed and impeccably researched history of the UFW...a clear-eyed narrative and analysis of the successes and mistakes made by a group of men and women trying to organize a section of the US working class notoriously difficult to organize. [A]n expansive, readable study of one of the more meaningful struggles of the twentieth century and an instruction book for anyone interested in organizing workers to regain the wealth that they create.”

“The UFW has been scrutinized recently but no writer approaches the breadth and depth that Bardacke achieves...notable for its view of working class democracy and the need for strong base organization in labor unions and movements. There is much to learn about, to grieve, and to celebrate in this opus written by our union colleague Frank Bardacke.”

“You can take little sections out of the book and they're the best thing ever written on the subject.” 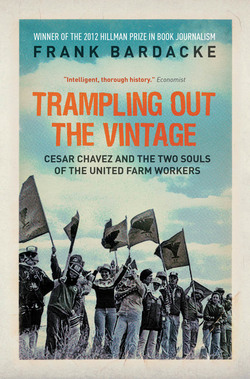 Trampling Out the Vintage
by Frank Bardacke
40% off