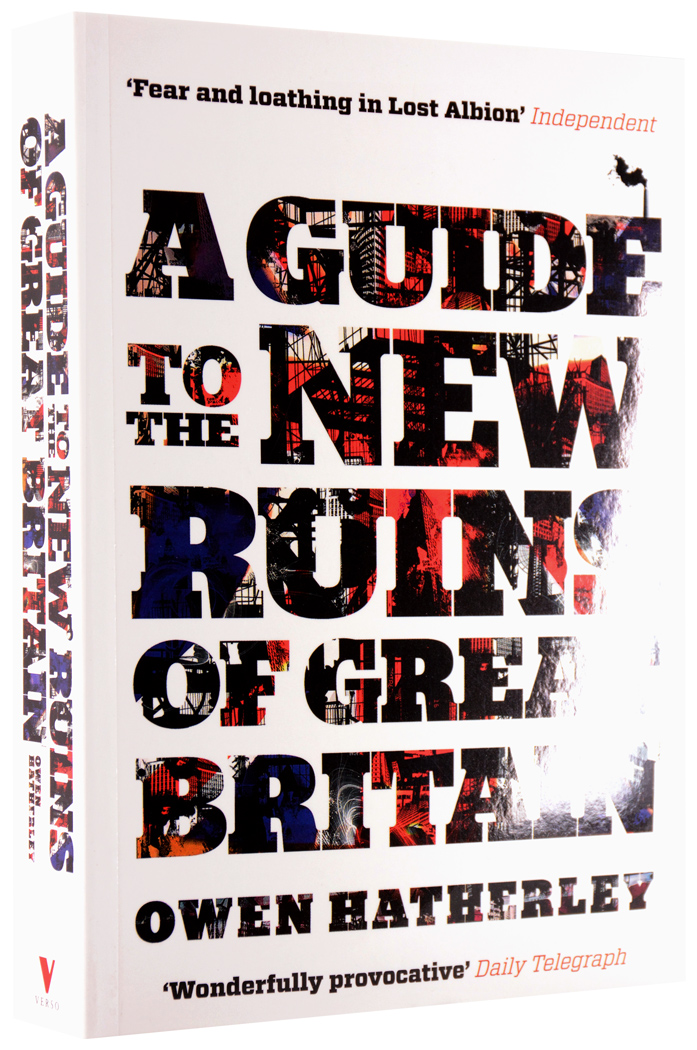 A darkly humorous architectural guide to the decrepit new Britain that neoliberalism built.
Back in 1997, New Labour came to power amid much talk of regenerating the inner cities left to rot under successive Conservative governments. Over the next decade, British cities became the laboratories of the new enterprise economy: glowing monuments to finance, property speculation, and the service industry—until the crash.

In A Guide to the New Ruins of Great Britain, Owen Hatherley sets out to explore the wreckage—the buildings that epitomized an age of greed and aspiration. From Greenwich to Glasgow, Milton Keynes to Manchester, Hatherley maps the derelict Britain of the 2010s: from riverside apartment complexes, art galleries and amorphous interactive "centers," to shopping malls, call centers and factories turned into expensive lofts. In doing so, he provides a mordant commentary on the urban environment in which we live, work and consume. Scathing, forensic, bleakly humorous, A Guide to the New Ruins of Great Britain is a coruscating autopsy of a get-rich-quick, aspirational politics, a brilliant, architectural "state we're in."

“Angry, fiercely funny.... Essential reading for anyone who ever feels their blood start to boil when they hear the word ‘regeneration.’”

– Hari Kunzru, author of My Revolutions

“An exhilarating book. Owen Hatherley brings to bear a quizzing eye, venomous wit, supple prose, refusal to curry favor, rejection of received ideas, exhaustive knowledge and all-round bolshiness. He travels, self-consciously, in the famous footsteps of J. B. Priestley and Ian Nairn, and there can be no higher praise than to suggest that he proves himself their peer. This book is as much a marker for an era as English Journey and Outrage were.”

“Hatherley's footloose narrative is driven by a heartfelt anger ... as well as a laudable desire to open people's eyes to the true value of their cities.”

“A book of finespun rage ... a book that had to be written. Wittily, bitterly, pithily, mostly accurately, Hatherley tells it how it is.”

“This surgical evisceration of the cityscapes of Blairism is required reading.”

“Hatherley is always entirely clear about his personal standpoint, so his criticisms never seem unjustified ... A rather bleak undercurrent is tempered by Hatherley’s often witty observations and easy-going prose style.”

“This is a different kind of Heritage Britain, the kind that the tourists don't usually get to see ... this is also the real Britain, and Hatherley is the most informed, opinionated and acerbic guide you could wish for.”

“Roomy and intellectually sophisticated.. It is bold and original, and it may change how you see British cities.”

“This is fear and loathing in Lost Albion riffed by a quainter version of Hunter S Thompson.”

“Painted with a raging energy that is exhilarating ... [It's] political, sinister, sometimes funny.”

“A serious left-field attempt to provoke thought and argument ... This is an important book that is entirely worthy of the arguments it sets out to provoke.”

“Hatherley deserves to be widely read … he has brought a welcome freshness and honesty to architectural criticsm.”

“The latest heir to Ruskin ... Hatherley blasts the architectural style of New Labour Britain. Whatever your pet-hate, Hatherley will probably have some enjoyably cruel words for it.”

Stop Me If You Think You've Heard This One Before: A Study in the Politics and Aesthetics of English Misery

Owen Hatherley reflects on the generational divides that have emerged over the course of the last two UK general elections by charting the musical evolution of The Smiths. Comparing Morrissey’s political trajectory to those of many voters throughout the North of England, Hatherley investigates the roots of the North’s departure from anti-Thatcherite collectivism to nationalist reaction.