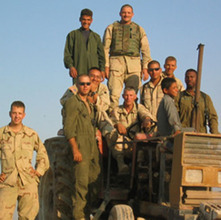 In 2003, Battalion 1.68, part of the 4th Infantry Division, set up a small jail for Iraqis captured on suspicion of insurgent activity. One soldier from this unit, Sergeant Adam James Gray, seemed especially upset by the prisoner abuse. In August 2004, he was found dead in his barracks in Fort Wainwright, Alaska. For more than three years, Joshua E.S. Phillips investigated Adam's death with the support of Adam's mother, Cindy. Gray's story reveals that it is not only CIA agents or prison guards in now-infamous sites like Abu Ghraib who participate in abuse, but ordinary soldiers who never expected to engage in interrogation and torture, or to pay the psychological price for it.

In this talk, Joshua E.S. Phillips, author of None of Us Were Like This Before, provides a unique insight into the hearts and minds of the men who put their lives (and their sanity) on the line in the war on terror.