The Invention of the White Race
Groundbreaking analysis of the birth of racism in America.

When the first Africans arrived in Virginia in 1619, there were no “white” people, nor, according to colonial records, would there be for another sixty years. In his seminal two-volume work, The Invention of the White Race, Allen details the creation of the “white race” by the ruling class as a method of social control, in response to labor unrest precipitated by Bacon’s Rebellion. Distinguishing European Americans from African Americans within the laboring class, white privileges enforced the myth of the white race through the years and has been central to maintaining ruling-class domination over the entire working class.

Since publication in the mid-nineties, Invention has become indispensable in debates on the origins of racial oppression in America. Volume One utilizes Irish history to show the relativity of race and racial oppression as a form of social control. Volume Two details the development of racial oppression and racial slavery in colonial Virginia and, more broadly, Anglo-America. A new introduction by Jeffrey B. Perry discusses Allen’s contributions, critical reception and continuing importance.

Further comments from scholars and activists on Invention can also be found online, for Volumes One and Two. 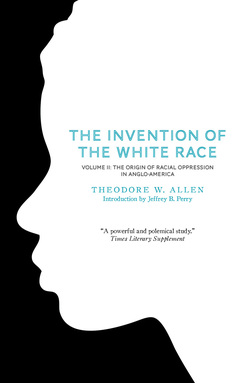 The Invention of the White Race, Volume 2
by Theodore W. Allen
30% off