After five years of investigative reporting in the risky drug world of Mexico, Anabel Hernández wrote Narcoland—an unparalleled account of Mexico’s drug cartels and its most important figure, 'El Chapo'. The book has sold over 1,70,000 copies in Mexico. 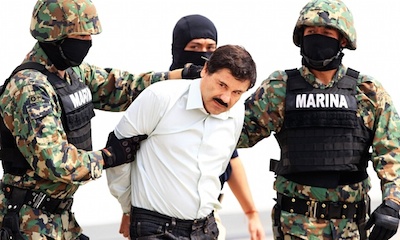 Narcoland: The Mexican Drug Lords and Their Godfathers, which rigorously details the insider job behind Joaquín ‘El Chapo’ Guzmán's earlier prison break in 2001, is the only book you will need to understand the workings behind his recent and second escape from a maximum-security prison in Mexico, as this Guardian article recommends:

Guzmán ran this previous jail, just as he ran the cartel: a book by one of Mexico’s leading writers on the mafia, Anabel Hernández, reveals that he held extended family Christmas parties inside over several days and that the story that he got out in a laundry truck is a myth – Guzman actually escaped in police uniform, with a police escort, a day after the minister for justice arrived on the scene to react to the ‘break out’.

Today there is almost no one still behind bars for what the authorities call ‘El Chapo’s escape.’ Even the warden of the maximum security prison, Leonardo Beltrán Santana, whose path I crossed a couple of times in the VIP dormitory of the Reclusorio Oriente, was freed in 2010.

Hernández became a journalist after the police refused to investigate her father’s murder without a bribe. She risked her own life in writing this book and continues to receive death threats.

She’s had headless animals left at her door and her family have been threatened by gunmen ... Narcoland became, and remains, a bestseller: more than 100,000 copies sold in Mexico.
–Observer

Narcoland describes a disastrous 'war on drugs' that has led to more than 80,000 deaths in half a dozen years. This is a book that exposes how everything in Mexico is implicated in the 'narco system.'
–Roberto Saviano, author of Gomorrah, from the foreword to Narcoland

Narcoland, with its explosive descriptions of decades of corruption permeating the upper echelons of government, leaves an extremely bad taste in the reader’s mouth about the state of Mexico’s perennially corrupt institutions – and begs the question: how much has changed? For Narcoland, Anabel Hernández spent five years combing police, court and US papers, securing access to informers and sources and pursuing often fruitless requests for official files. The result is a searing indictment of a war on drugs she believes was a sham from the start.
–Financial Times

Hernández charts Guzmán’s progress from rural poverty to the head of the Sinaloa cartel, “the most powerful criminal organisation in the Americas”. This brave and important book describes the corruption of an entire country.
–The Guardian

To read the article in full, visit The Guardian.
Narcoland is available for purchase here.
Tagged
Latin America