President’s Day: Patrick Wolfe on Settler-Colonialism, Genocide, and the Foundation of the United States

To de-commemorate President’s Day, an annual holiday created to honor George Washington, we bring you an extract from Patrick Wolfe’s Traces of History: Elementary Structures of Racism. Here Wolfe explains how the founding of the United States spelled disaster for native populations. From the beginning, the American legal system treated natives as non-citizens that were, nevertheless, subordinate to the federal government; it was precisely this theory of law — vigorously supported by Washington, Jefferson, and Jackson (among others) — that made the nation one built on settler-colonialism. 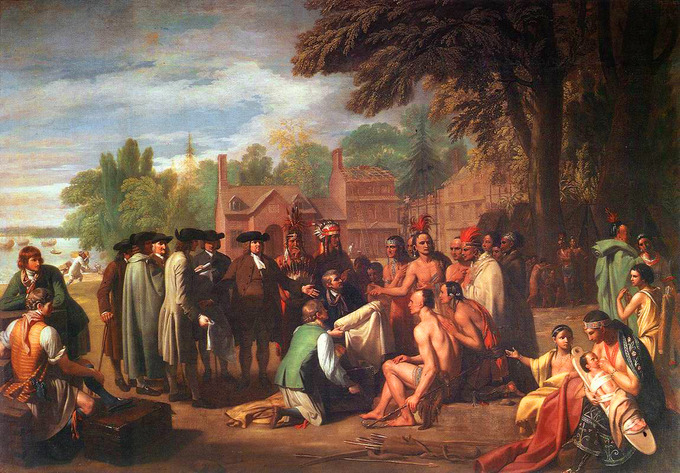 The solution that the framers of the Constitution adopted, almost without debate, consisted in a reassertion of the sovereign’s pre-emptive monopoly over land transactions with Indians. The so-called ‘treaty clause’ of the Constitution gave the president ‘power, by and with the advice of  the Senate, to make treaties, provided two-thirds of the Senators present concur’. An equally consequential five words were the ‘and with the Indian tribes’ that the Constitutional Convention added onto the end of the commerce clause of the Constitution, the earlier draft of which had merely given Congress the power to regulate commerce ‘with foreign nations, and among the several States’. On the basis of the Indian reference in the commerce clause, as Charles Wilkinson has pointed out, the first five weeks of the First Congress saw the enactment of no less than four major statutes devoted to Indian affairs. In his third annual address, delivered in 1791, President Washington expressed the hope that ‘all need of coercion in future may cease and that an intimate intercourse may succeed, calculated to advance the happiness of the Indians and’, as he continued significantly, ‘to attach them firmly to the United States’. Washington was only too aware that, in the British and the Spanish, the Indians had alternative options for attachment (options that would not become available to Indigenous people in Australia, whose sovereignty would remain correspondingly unacknowledged). Moreover, as Supreme Court Justice and Constitution-signer James Wilson observed, ‘there were neither men nor supplies for the defence of the frontier’.

In the event, Congress — whose initial act had been to set up the Department of War with special responsibility for hostilities with Indians — passed a series of trade and intercourse acts intended to regulate relations between Indians and Whites. Four of these acts were passed in Congress’s first decade (in 1790, 1793, 1796  and 1799 28). Together, they were intended to ensure that Indian affairs became a federal preserve (shared between the president and the Senate), principally through federal control of land acquisitions, as under the doctrine of preemption, but also through federal controls on Indian trade and Indian-related criminal proceedings. This outcome perpetuated the doctrine of discovery. As noted above, the concept of preemption both regulated relations between European sovereigns and subordinated local colonial governance to the metropolitan centre. Both these outcomes continued straightforwardly from the federalising of Indian affairs, which, on the one hand, proscribed diplomacy between Indian nations and European ones and, on the other, subordinated the states to the federal government.

Though the trade and intercourse acts provided for federal primacy in Indian affairs, they did not clarify the status of the tribes or nations with whom the federal government could enter into its exclusive arrangements. Constitutionally, this remained an open question since, in response to Congressional concern over the republic’s Indian alliances in relation to the British and the Spanish, the Constitution had ratified previous treaties agreed between Indian nations and the British. Having acknowledged a sovereignty that had been in place in the British period, the Constitution could not simultaneously negate that sovereignty or reduce it to its own specifications. Rather, the acknowledgement itself entailed the recognition that Indian sovereignty was prior to and independent of the US Constitution.* Accordingly, the Constitution was silent on the matter.

Initially, the new republic maintained the British policy of treating the Indian nations as practical counterparts. As the military balance tilted the United States’ way, however, control over White people’s dealings with Indians, an internal matter, inexorably expanded into control over Indians themselves. In this enhanced strategic environment, various attempts were made to get around what was increasingly viewed as a constitutional anomaly. It was asserted that tribes who had sided with the British had been conquered in a just war, thereby forfeiting their sovereignty. But this by no means accounted for all the Indian nations with land in the territory claimed by the United States. An ostensibly more benign (and, as it turned out, more consequential) alternative was enunciated in 1795 at the treaty of Greenville, whose paternalistic language anticipated the fiduciary rhetoric of wards and guardianship that would later come to characterise the Marshall judgements.

This language not only invested Indian dispossession with humanitarian appeal. It also signalled the shift from British treaty-making with Indians — a way of coming to terms with a military rival — to the US treaty system, which was premised on a strong power’s dominance over weaker ones. But the USA and the British crown had fundamentally different strategic agendas. In particular, the British had been relatively anti-expansionist, since they feared (rightly, as it turned out) that expansion would render the colonists unmanageable. On this basis, it was prudent not to attempt to destroy the power of Indigenous neighbours who, in addition to providing assistance against the French, Dutch and Spanish, might also contribute useful support should the crown’s own colonial subjects prove troublesome. In the wake of independence, however, there was a marked shift to expansionism, not least because sales of public land, which was most cheaply available from Indians, provided a means for the federal government to pay off its substantial war debts. Moreover, so far as Indians were concerned – whichever side they may have taken in the war of independence — the shift from the British to the USA involved a shift from colonial subjecthood to non-citizenship. A corollary to the increased responsiveness to citizens that democratic republicanism introduced was a reduced level of responsiveness to non-citizens, a factor that favoured those who coveted the vast expanses of productive land that remained in Indian hands.

As the nineteenth century moved on, Indians rapidly lost their strategic assets. In 1803, any threat that the French might have posed was removed by the Louisiana Purchase. A decade later, in concluding the War of 1812, the Treaty of Ghent finally ended the British threat. The Spanish being marginal in Florida, this left Indians alone to face one of the most aggressive mass movements in history, logistically buttressed by the burgeoning canal network and steamboats, which first appeared in 1807. Andrew Jackson’s vanquishing of the British at New Orleans anticipated the comprehensive defeat, in the North-West in the following year, of Tecumseh’s British-allied pan-Indian uprising. The year after that, in 1814, Jackson routed the Creek Redsticks at Horseshoe Bend, extending US military hegemony from the Mississippi to the Atlantic and from Canada to Mexico. Given the efficiency of the recently invented cotton gin, combined with cotton’s rapid exhaustion of the soil (which generated a constant need for new plantations), this victory sealed the fate of the south-eastern tribes.

Nearly half a century after the signing of the Constitution, in this very different strategic context, the Marshall court finally confronted the wild card of Indian sovereignty, domesticating it to the republican constitutional environment. Though synthetic, in that it combined elements from the established discourse of discovery, the court’s version of Indian sovereignty was an invention contrived to accommodate the novel circumstance of settler-colonial nationhood. As such, the concept inaugurated ‘post’colonial jurisprudence, adapting a horizontal vocabulary to a vertical mode of domination. Given the parlous strategic circumstances to which Indians had been reduced (in Thomas Jefferson’s words, ‘we have only to shut our hand to crush them’), the question remains of why the United States maintained the notion of Indian sovereignty and persisted with the treaty-making that followed from it. How should we read the scrupulosity with which, no matter how thoroughly a people had been conquered, the United States insisted on acknowledging their sovereignty prior to removing, confining or otherwise dispossessing them?

* This situation entails continuing disadvantages for Indian peoples whom the British conquered without making treaties. ‘The United States came into existence long after English colonialism largely dispossessed New England Indians, and tribes there  lack a treaty relationship with the United States’: Jean M. O’Brien, Firsting and Lasting: Writing Indians Out of Existence in New England (Minneapolis: Minnesota UP, 2010), 203.

This is an extract from Patrick Wolfe's Traces of History: The Elementary Structure of Race.