Luciana Castellina reports on a talk on black feminism and contemporary American politics given by radical black activist and scholar Angela Davis at Roma Tre University on the 14th of March. The article was originally published in Italian in il manifesto and is translated by David Broder. 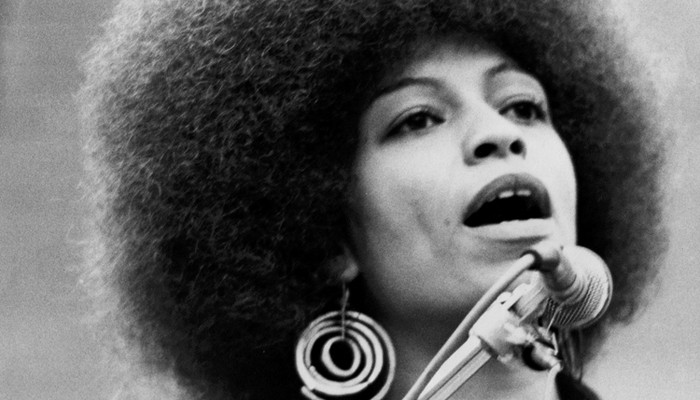 Are any of these students born in the ‘90s going to know who Angela Davis is? Are they going to show up for the meeting at Roma Tre university, held by the rector, professor Panizza, and the philosophy chair Giacomo Marramao (who studied with her in Frankfurt — it seems like a century ago)? Will they be interested in meeting a woman who was a mythical figure for we who were already mature in the ‘60s and ‘70s? Arriving at the Ostiense station, I was suddenly struck by the worry that only a few people would come to listen to her speak. I thought about the surveys saying that no one knows who Berlinguer was any more, and that people nowadays think Germany won World War II side-by-side with the Americans.

But I was grossly mistaken; the vast main hall of the university was overflowing, with dozens of people standing or sat on the floor. For sure, political leaders can be important, but a mythical figure like her is something else; it’s not by chance that she still appears on t-shirts on every continent. Beautiful, Black, intelligent, courageous, a fighter for the Black Panther Party, self-assured, and a communist to boot; a victim of the most horrendous racism, which saw her imprisoned on a homicide charge without the least proof, only being freed two years later thanks to one of the biggest mobilisations unleashed by the newborn ’68 movement. She is, indeed, a mythical figure. Not everyone gets to see the greats dedicating songs to them – the Rolling Stones’ Sweet black Angela, John Lennon’s Angela, and others by Yannick Noah and Pierre Perret, to name but a few of those that became most famous. ‘There was even one by the Quartetto Cetra’, the rector tells us — and that is truly a mark of popularity.

Today her famous afro hairstyle, worn like some banner of hers, has gone grey — she is now 73 years of age — but she’s still kept all the old moxie. The more than one thousand people crowding the room struggle to contain their emotions, with their number including not only students but also a number of militant feminists who’ve come from all over, who want to hear her — only her — and have no interest at all in the rest of us invited to comment from the top table. They want dialogue with her — it’s an opportunity not to be wasted. Understood. The planned programme is immediately cast aside. Only professor Rossini gets to speak, because she is meant to talk on feminism — and then a very long queue forms, as people wait to have their say. Only a few get to do so, almost all of them Black Italian women, and an extraordinary young Kurdish woman, who we listen to with emotion and uncontainable applause.

Naturally, Angela speaks in English, and there’s no translation, but I am amazed to see everyone following along, and indeed applauding and laughing at the right moments. She tells us how widespread racism still is not only in the USA, but everywhere; ‘here in Europe’, she says, ‘with the refugees, you are having to deal with your own colonialism’. And then she focuses on the Palestinians, hit hard by the ugliest racism. (‘But over in the US’, she also makes clear, ‘the people who burn black churches also burn synagogues’).

Angela talks a lot about Black feminism, and starts by giving a terrible statistic: one third of the world’s incarcerated women are locked up in American prisons, even though the US represents only 5% of the global population. And they are Black women. ‘Gender doesn’t stand by itself’, she repeats; ‘This category doesn’t alone explain it; we also have to bring to question in both class and race’. ‘There’s a danger of falling into the trap of a certain white, bourgeois feminism (but also of remaining blind to Black machismo, including that of the “Panther” comrades)’. ‘Hillary hasn’t understood’, she adds, that ‘feminism has changed; today the question of identity isn’t the most important. What counts is gender politics, not gender in itself, taken as a given. Today there is a more radical feminism that understands that this question has to be put in context — set in relation with the ruling system in which we live’.

‘Indeed, this was the reason’, she adds ‘that working-class Black women were long distant from feminism: today, that’s no longer the case’. So gender and race are less important than one’s social position? ‘No, these are intersecting contradictions, but contradictions that have changed, because a Black bourgeoisie has now emerged. This is the fruit of a fight against segregation. But it also meant being taken on board the ship of capitalism’. There is great applause as she declares ‘There is not just one feminism; there are many feminisms’.

The meeting ends with the acclaim greeting her concluding words: ‘Sometimes we also have to say things that we might consider unrealistic. This, too, is philosophy’s role: to look beyond. We again have to start imagining, right now, what a world different from our current one might be like’.

In these words, I hear a powerful echo of Herbert Marcuse, who was her teacher first in Frankfurt in the ‘60s, together with Adorno and Oskar Negt, and then in the United States. I mention Marcuse, because I remember what he always repeated: today utopia has lost its unrealistic character; science and technology will allow all of us to realise what Marx was dreaming of; a life in which time was freed up (as he wrote in the German Ideology) to prepare good food and decorate our own homes. It is the relations of social production that prevent this.

We chat about this and other things after the meeting is over, across the table of the Biondo Tevere restaurant at the end of the urban chunk of Via Ostiense, where Pasolini used to come and where Visconti shot an unforgettable scene in Bellissima. I ask her why the new movements that have animated the American political scene in recent years have remained either Black or white, and barely mixed. For example, I mention the testimony of a Black militant in Occupy Wall Street who was shocked when she saw that everyone in Zuccotti Park was white. And then — I pressure her further — there has been the great mobilisation by Black people, against the series of homicides perpetrated by police, beginning with the murder of Mike Brown in Ferguson. Almost everyone in Black Lives Matter is Black. The surveys show it: whites’ solidarity with Black people’s struggles was much stronger in the 1960s than it is now.

And further still: the very important new struggles developing at the local level, but which are spreading like wildfire, also seem to be either Black or white. I ask her about the fast-food workers’ movement for $15 an hour, a minimum wage and union recognition, whose slogan is ‘I don’t care who’s candidate for president, I want my rights’: an almost wholly Black movement. And then I think about the growing movement in the universities, driven by a million student-workers who demand better pay and a ‘just cause’ termination clause (they’ve discovered our own article 18!) [1]: it’s almost wholly white. And while they’re all for Bernie Sanders, Black communities vote en masse for Hillary. What’s happening?

‘In reality’, Angela tells me, ‘there were a lot more Black people involved in Occupy than it might seem, even if it was white activists who took centre-stage. But it is true that this separation exists: it results from culture, customs, where we live, and working conditions. Racism penetrates everything and everyone, and we are all infiltrated by it in one way or another. Think about the vote in Germany: isn’t that, perhaps, the effect of racism?’

‘As for Bernie Sanders’, she explains, ‘you have to take into account the fact that traditionally Blacks have stood outside electoral politics, and have never truly been involved. And also the fact that Bernie Sanders is an expression of the political culture of the North, in a very particular state like Vermont, like as if he was a Trentino [from Italy’s far North] in Sicily. He isn’t able to speak to Blacks, he his colour-blind, he has not taken the race question on board, only the social one. His universalism, it should be recognised, is a false one. However, I should say that he is learning, and now he is much better than he was to start with.

What is the Black president’s role in this scenario — what role is Obama playing? ‘I think’, she answers, ‘that we’ll miss him. The Occupy movement could not have developed if someone else had been president. But precisely because he is Black, the expectations among Blacks were very high, perhaps too high compared to what he was concretely able to do. So a lot of people have been left disappointed or resentful, and for them the president seems like nothing but the exponent of the new Black bourgeoisie. Whereas they expected nothing from [Bill] Clinton, precisely because he was white. And they are grateful to him. So now they vote for his wife. Rather than for a socialism that sounds like a foreign culture’.

There are millions of things we could discuss. I would like to talk with her about what communism means for her today, and what she thinks of the Soviet experience, having been a militant in a very orthodox Communist Party like the CPUSA. Indeed, it was in the USSR that I first met her, at a peace conference held in Moscow in 1986. Gorbachev was there, and both Angela and I were hopeful that something new might happen in the Soviet Union. That wasn’t how it turned out. I wanted to discuss that with her. But there wasn’t time: Angela had to catch the train, because they were expecting her at the University of Bologna.

[1] A labour code measure putting limits on the firing of workers, undermined by ‘reforms’ undertaken by a series of recent Italian governments.