"Arendt herself was a Zionist, but this did not prevent her from speaking the truth" - Tariq Ali

At the time she wrote her book on the Eichmann trial, Arendt herself was a Zionist, but this did not prevent her from speaking the truth and at a high personal cost. She was denounced by many she had known and a few very close personal friends in Israel and New York broke off all relations. The film on her life is definitely worth a watch. The extracts below from her book are worth reading in any case, but given that the soft left in the Labour Party has lost momentum and is tending to cave in to carefully orchestrated media and pro-Zionist campaigners, these extracts show that however misjudged Ken Livingstone's comments may have been they are not historically inaccurate. Yesterday the Deputy Chief of the IDF [Israeli Defence Force] declared that Israel was in a late-Weimar situation, i.e., on the edge of fascism. This would not have surprised Arendt but would have got the Israeli army chief suspended from the British Labour Party. - Tariq Ali 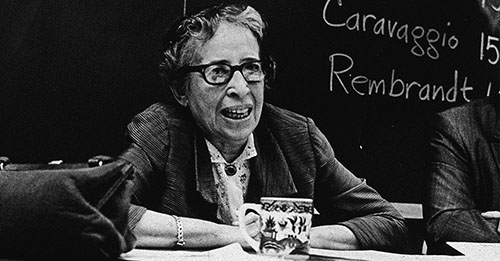 Taken from Eichmann in Jerusalem by Hannah Arendt:

Had this been an ordinary trial, with the normal tug of war between prosecution and defense to bring out the facts and do justice to both sides, it would be possible to switch now to the version of the defense and find out whether there was not more to Eichmann's grotesque account of his activities in Vienna than meets the eye, and whether his distortions of reality could not really be ascribed to more than the mendacity of an individual. The facts for which Eichmann was to hang had been established “beyond reasonable doubt” long before the trial started, and they were generally known to all students of the Nazi regime. The additional facts that the persecution tried to establish were, it is true, partly accepted in the judgment, but they never would have appeared to be “beyond reasonable doubt’ if the defense had brought its own evidence to bear upon the proceedings. Hence, no report on the Eichmann case, perhaps as distinguished from the Eichmann trial, could be complete without paying some attention to the certain facts that are well enough known but that Dr. Servatius chose to ignore.

This is especially true of the Eichmann’s muddled general outlook and ideology with respect to the “Jewish question.” During cross-examination, he told the presiding judge that in Vienna he “regarded the Jews as opponents with respect to whom a mutually acceptable, a mutually fair solution had to be found…. That solution I envisaged as putting firm soil under their feet so that they would have a place to call their own, soil of their own. And I was working in the direction of that solution joyfully. I cooperated in reaching such a solution, gladly and joyfully, because it was also the kind of solution that was approved by movements among the Jewish people themselves, and I regarded this as the most appropriate solution to this matter." This was the true reason they had all "pulled together," the reason their work had been "based upon mutality." It was in the interest of the Jews, though perhaps not all Jews understood this, to get out of the country; “one had to help them, one had to help these functionaries to act, and that’s what I did.” If the Jewish functionaries were “idealists” that is, Zionists, he respected them, “treated them as equals,” listened to all their “requests and complaints and applications for support,” kept his “promises” as far as he could – “People are inclined to forget that now.” Who, but he, Eichmann, had saved hundreds of thousand of Jews? What but his great zeal and gifts of organization had enabled them to escape in time? True, he could not foresee at the time the coming Final Solution, but he had saved them, that was a "fact." (In an interview given in this country during the trial, Eichmann's son told the same story to American reporters. It must have been a family legend.)

Eichmann, though much less refined than statesmen and literary critics, could, on the other hand, have cited certain indisputable facts to back up his story if his memory had not been so bad, or if the defense had helped him. For "it is indisputable that during the first stages of their Jewish policy the National Socialists thought it proper to adopt a pro-Zionist attitude" (Hans Lamm), and it was during these first stages that Eichmann learned his lessons about Jews. He was by no means alone in taking “pro-Zionism” seriously; the German Jews themselves thought it would be sufficient to undo “assimilation” through a new process of “dissimilation,” and flocked into the ranks of the Zionist movement. (There are no reliable statistics on this development, but it is estimated that the circulation of the Zionist weekly Die Jüdische Rundschau increased in the first months of the Hitler regime from approximately five to seven thousand to nerly forty thousand, and it is known that the Zionist fund-raising organizations received in 1935-36, from a greatly diminished and impoverished population, three times as much as in 1931-32.) This did not necessarily mean that the Jews wished to emigrate to Palestine; it was more a matter of pride: “Wear it with Pride, the Yellow Star!," the most popular slogan of these years, coined by Robert Weltsch, editor-in-chief of the Jüdische Rundschau, expressed the general emotional atmosphere. The polemical point of the slogan, formulated as a response to Boycott Day, April 1, 1933 - more than six years before the Nazis actually forced the Jews to wear a badge, a six-pointed yellow star on a white ground - was directed against the "assimilations" and all those people who refused to be reconciled to the new "revolutionary development" those who "were always behind the times" (die ewig Gestrigen). The slogan was recalled at the trial, with a good deal of emotion, by witnesses from Germany. They forgot to mention that Robert Weltsch hinself, a highly distinguished journalist, had said in recent years that he would never have issued his slogan if he had been able to forsee these developments.

But quite apart from all the slogans and ideological quarrels, it was in those years a fact of everyday life that only Zionists had any chance of negotiating with the German authorities, for the simple reason that their chief Jewish adversary, the Central Association of German Citizens of Jewish Faith, to which ninety-five percent of organized Jews in Germany then belonged, specified in its bylaws that its chief task was the “fight against anti-Semitism”; it had suddenly become by definition an organization “hostile to the State,” and would indeed have been persecuted – which it was not – if it had ever dared to do what it was supposed to do.

Hannah Arendt (1906–1975) was one of the most influential political philosophers of the twentieth century. Born in Hanover, Germany, in 1906, she fled to Paris in 1933, and came to the United States after the outbreak of World War II. She was editorial director of Schocken Books from 1946 to 1948. She taught at Berkeley, Princeton, the University of Chicago, and The New School for Social Research. Arendt died in 1975.

Tariq Ali is a writer and filmmaker. He has written more than a dozen books on world history and politics—including Pirates of the Caribbean, Bush in Babylon,The Clash of Fundamentalisms and The Obama Syndrome—as well as five novels in his Islam Quintet series and scripts for the stage and screen. He is an editor of the New Left Review and lives in London.

- See also On Israel and Anti-Semitism: A Reading List