Policing the Planet: On The Daily Life of Policing

Broken windows operates as a doctrine to broaden the capacities of the police and regulate the lives of the racialized poor and the working class. For the last two decades, it has been successfully exported from New York to cities across the globe, to Baltimore, Los Angeles, London, San Juan, and San Salvador. The introduciton to Policing the Planet, by book editors Christina Heatherton and Jordan T. Camp, explains how broken windows policing is linked to the policing of the planet — the struggle against racism, militarism, and capital. 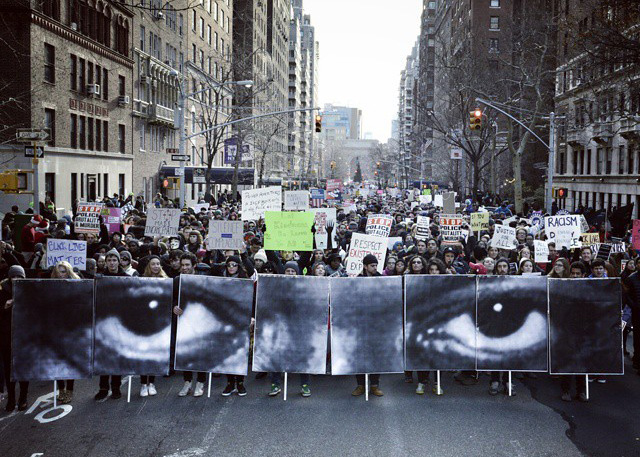 Eric Garner lived on the brink of uncertainty. His death at the hands of New York City police officers in 2014 followed years of incessant harassment for small-scale infractions, including the sale of untaxed loose cigarettes. Garner was regularly stopped and searched, and—as his 2007 civil rights lawsuit detailed—humiliated and sexually violated by police in public. Before he was slain on a Staten Island sidewalk, he pleaded with approaching officers, “Every time you see me you arrest me. I’m tired of it. It stops today.” Garner’s murder, filmed on a phone by his friend Ramsey Orta, was viewed millions of times by people around the world. Garner’s final desperate words to the officers choking him, “I can’t breathe,” became a rallying cry for organizers and activists fighting to end police violence and impunity. Similarly, his plea, “This stops today” was transformed into a demand to end the prosaic surveillance, arbitrary harassment, and intimate violations—the daily life of policing—that led to Garner’s fatal assault. Protesters not only questioned how Eric Garner died; they also challenged the conditions under which he was forced to live.

Eric Garner’s name has joined a morbidly expanding roll call of the racialized poor killed by police and vigilante violence. Demonstrators have refused to let these premature deaths be explained away as mere excess or accident. They instead cast this violence as routinized and widespread. In so doing, they have called attention to the underlying material conditions that have preceded and ultimately enabled these killings. Rather than asking how the police can kill less, they have forced a broader set of questions: Why have the police been endowed with the arbitrary capacity to regulate the lives of the racialized poor in US cities? Why do they have expanding and unfettered access to the bodies of poor people in general and poor people of color routinely? How and why are poor people criminalized for occupying public space? Can the problem of police violence actually be solved with the addition of more police (even better trained, more diverse, or better monitored) as many police departments and federal proposals suggest? How have these issues been addressed in other global contexts? And finally, what alternate definitions of security might we imagine?

This book, Policing the Planet, is a collaborative effort between social movement organizers, scholar-activists, journalists, and artists to address these questions. Following the lead of social movements, it reassesses the policing philosophy known as “broken windows theory.” Praised as a comprehensive model of “community policing,” this doctrine has vastly broadened the capacities of police both nationally and globally. Through essays and interviews, the book explores the rise and spread of broken windows policing. In analyzing vengeful policing campaigns waged against the racialized poor, Native people, immigrant workers, Black and Brown youth, LGBTQI and gender-nonconforming people, the homeless, sex workers, and others, it demonstrates that broken windows policing emerged as an ideological and political project. In examining its spread throughout the United States and around the world, it explores how broken windows policing has become the political expression of neoliberalism at the urban scale. Racism, it argues, has sustained and naturalized these processes as inexorable and inevitable. The book therefore considers the struggle against racism, militarism, and capital—the policing of the planet—as a central political challenge of our times.

The underlying concept of broken windows policing is deceptively simple: to stop major crimes from occurring, police must first prevent small signs of “disorder” from proliferating, such as graffiti, litter, panhandling, public urination, the sale of untaxed cigarettes, and so forth. It proposes that the best way to prevent major crimes is for people to take responsibility for their neighborhoods and for the police to facilitate that process. The metaphor goes that if a window in a neighborhood stays broken, it signals neglect and encourages small crimes, which then lead to larger ones. Disorder in the form of minor violations is presumed to breed larger disorder. Instead of addressing “individual crimes,” broken windows theory has given police new authorization to control and moderate behavior. While analysts note that such invasive policing is by no means unique to the present moment, given the broad transformations in police policy, training, and funding, there is a general consensus that broken windows policing has constituted a fundamental expansion and redefinition of state capacities at the urban scale both across the country and worldwide.

In the current crisis of mass incarceration, broken windows is often presented as the milder, more community-minded alternative to more aggressive forms of policing. As Bernard E. Harcourt notes, this false presentation of broken windows as a substitute to mass incarceration belies its function as a robust supplement to it. Such supplements have only enhanced the collective punishments of communities already under siege. As deindustrialized cities have become veritable landscapes of broken windows—replete with abandoned homes, job sites, and factories—policy makers and police departments have utilized the logic of broken windows to locate disorder within individuals, offloading liability onto the bodies of the blamed.

Broadly speaking, broken windows policing has normalized a shift in state capacities away from the production of social goods and towards “security” concerns produced in their absence. Under this arrangement, the police can effectively function in an array of roles, such as mental health facilitators, school disciplinarians, public housing managers, and guards against park trespassing. In some municipalities, the police also aggressively function as surrogate tax collectors or “revenue generators” as the Department of Justice investigation into the Ferguson Police Department recently concluded. In less-well-studied examples, such as Los Angeles, $87 million of the $100 million city budget devoted to homelessness has been allocated to policing. Lest we forget, Akai Gurley was assassinated by officers patrolling public housing projects; twelve-year-old Tamir Rice was killed by police charged with securing a public park; and Eric Garner was strangled by police regulating a public street for the sale of untaxed cigarettes. Broken windows policing produces such fatal encounters wherein one overfunded segment of the state dominates, assaults, and helps to reinforce the eradication of another.

The recent protests suggest that this arrangement will not go unchallenged. Uprisings against police violence from New York, Ferguson, Baltimore, and beyond indicate a crisis of authority and legitimacy for US policing. As tens of thousands of demonstrators took to the streets following Garner’s death, New York City police commissioner William Bratton assessed the situation:

Let’s face it, we’re in a crisis at this time, in this country, on issues of race, around effectiveness of policing, around police tactics, probably the most significant I’ve seen since I joined policing in 1970.

Given his formative role in the popularization of this model, the commissioner’s insights were unwittingly poignant. Bratton has the dubious distinction of being twice appointed as New York City police commissioner, first in 1993 and twenty years later in 2013. In the intervening twenty years, Bratton’s broken-windows style policing has been successfully exported around the planet. From New York to Baltimore, Los Angeles, London, San Juan, San Salvador, and beyond, Bratton’s model has become a neoliberal urban strategy practiced and adapted worldwide.

Broken windows took shape as a political response to the urban crises of the 1960s and 1970s. It became the hegemonic strategy of community policing alongside the consolidation of the carceral state and neoliberal transformation of cities in the late twentieth century. Bratton oversaw its implementation as part of his dedication to “reclaiming the public spaces of New York” during the 1990s. In the logic of broken windows policing, “aggressive panhandling, squeegee cleaners, street prostitution, ‘boombox cars,’ public drunkenness, reckless bicycles, and graffiti” constituted the source of economic and even existential insecurity. Bratton, alongside Mayor Rudolph Giuliani and intellectual architects from the neoliberal think tank Manhattan Institute, proposed “zero tolerance” measures as the solution to these problem “behaviors.” The purported success in New York (its “turnaround,” as the Manhattan Institute and Bratton like to tout) provided a transportable model for cities facing social and economic crises. This volume argues that the “success” of broken windows policing has functioned as an urban strategy enabling the gentrification of cities—a class project that has displaced the urban multiracial working class worldwide.

Most perniciously, broken windows policing has been presented as a race-neutral response to criminality. Its disproportionate deployment against poor communities of color has been justified as mere statistical inevitability. Consider, for example, Bratton’s recent assertion that the mass arrest of African Americans and Latinos stems from “intractable racial disparities in who commits—and more importantly, who suffers from—crime and disorder.” In turn, he purports that African Americans and Latinos are not targeted in broken windows policing campaigns but rather are subject to mass arrest because, he claims, they have a greater propensity for crime just as they are greater victims of it. Broad consent to policing and prisons has been legitimated through such circular racial logic. Just as mass incarceration has depended on a selective suturing of racial categories to criminality, so too has broken windows policing conflated the racialized poor with spatialized disorder. By doing so, racism eludes discussions of policing at the same moment that it animates its practice. The essays and interviews gathered here suggest ways in which we might confront the policy of broken windows while overcoming the racist common sense underpinning it.

Policing the Planet traces the exportation of the broken windows model as Bratton himself became a highly sought-after security consultant for urban governments worldwide. In turn, it highlights how this new urban security regime has given rise to dramatic and increasingly internationalized social movements confronting racist and uneven capitalist developments worldwide. Accordingly, this book situates the protests in Ferguson, New York, Baltimore, Chicago, and beyond in 2014 and 2015 in the context of global struggles against policing and prisons in the early twenty- first century. Through interviews with and essays from prominent writers and activists, Policing the Planet foregrounds the visions that have emerged from antiracist social movements. This volume explores how the demand to abolish broken windows policing and mass incarceration might contribute to popular democratic struggles against neoliberal racial regimes and for social and economic justice across the United States and the world.

This essay is taken from Policing the Planet: Why The Policing Crisis Led to Black Lives Matter, edited by Jordan T. Camp and Christina Heatherton.