Corbynism and the Parameters of Power by Alex Williams

"With the election of Corbyn, a new opportunity arises for a historic re-engagement with an ambitious politics across the Left in the UK" - Alex Williams, co-author of Inventing the Future, looks at how the the politics of Corbynism can genuinely create transformative change.

This essay is taken from our ebook collection, Corbyn and the Future of Labour - free to download, with contributions from Tariq Ali, Rachel Shabi, George Monbiot, Richard Seymour, Hilary Wainwright, and more. 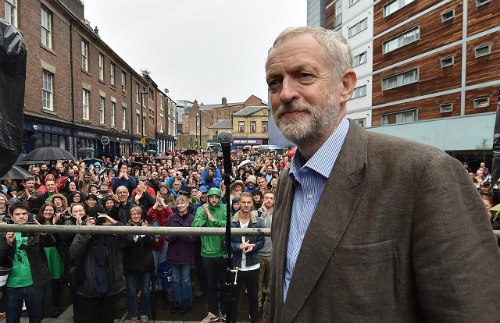 One recent claim, made by those on the Labour ‘moderate Right’, has been that the Labour membership endorse Corbyn because they ‘don’t care about winning the next election’. There is a degree of truth to this, although not in the terms presented by the Labour Right. Why is this?

The logic that ran through most of the Labour Party from the 1990s to shortly before Corbyn’s ascension, and which still constitutes the ruling political common sense among ‘moderates’ today, states the following:

What were the effects of understanding the parameters of power in these terms? The end result saw a programme of neoliberalising the Labour party, acceding to many (if not all) of the hallmark policies of neoliberalism: market efficiency as governance norm, privatisation, marketisation, and contracting out. While Labour were committed to ‘sharing the proceeds of growth’ more equitably than in the Thatcher and Major years, the process by which growth was to be achieved remained the same: the embedding of neoliberalism within government, society, and the economy. Rampant financialisation, the reliance of households on house price increases, and the hollowing out of the welfare state were some of the key consequences.

Two strands within the Parliamentary Labour Party supported such a programme. The first group acceded to neoliberalism totally: the true believers. Meanwhile the second viewed its own strategic position as so weak it felt compelled to throw its lot in with the new regime.

This first group were those who had fully imbibed that discourse first developed by the Austrian school of economic and social theorists – in particular Hayek and von Mises – that proposed that the world was sim- ply too complex to manage through state control and that only markets would be capable of functioning as an appropriately supple information- processing and coordination system. While Thatcher had developed an economic response to these conditions, it could be managed more humanely and with less socially harmful effects than it had been by the Tory Party. Here we might think of Tony Blair and Peter Mandelson, along with their key allies and acolytes. The second group perceived neoliberalism as basically false and/or malign in its results, but could not discern any way to win power without agreeing to some of its terms. We might think here of a large tranche of what has been called the ‘soft Left’, including key Brownites, along with some of the major UK unions in the 1990s and 2000s.

Returning to the original question, then, what might the actual parameters of power look like? Why was New Labour (and its inheritors today) so wrong?

Here we need to move beyond thinking of winning a singular position of power (for example, state power). Instead, we need to highlight a more complex, dynamic, and open-ended understanding of what power is, and therefore where it lies. In this, we need to talk about hegemony, an idea that was developed most famously by the Italian Marxist Antonio Gramsci. Hegemony is a system of power within complex societies like the UK. Some of the key ideas of hegemony are as follows.

There is no singular position from which power is exercised, but only relative locations. Therefore, power within the state is important, but only insofar as it interacts with power in other locations – such as the media, social movements, the economy, finance, infrastructure, culture, and so on. To focus on state power over and above power in other areas of society is therefore short-sighted, and likely to be self-undermining over time.

The ultimate mode of power is the power to configure the space on which politics is played out, to change ‘the rules of the game’. This might be thought of in terms of control over ideas of common sense and the array of possible acceptable opinions. Real power lies in transforming this array, rather than acceding to what already exists.

Looking at politics through the lens of hegemony therefore demonstrates that while nothing is inviolable, we must still work with the world as it is today. Nevertheless. 'opinions', 'desires', 'beliefs' can all be re-engineered, shifted, or re-articulated. This is where hegemony can mean something like 'leadership'-- changing, rather than merely reflecting, what publics think. Such leadership cannot just consist of a rationalistic insistence, but rather work upon existing beliefs and desires to transform them over time.

Hegemonic power is complex, not simple. It can have a component of force, or coercion, but largely operates in the space between pure force (such as a policeman’s truncheon) and pure active assent (for example, being an ideological true believer). This space might be defined as minimally passive consent, or the path of least resistance. The overriding objective of hegemonic strategy is to use more short-term forms of power to achieve long-lasting modes, and transform what minimally passive consent consists of.

This ultimately leads to what Gramsci termed ‘the historic bloc’: a social system where the state, civil society, the economy, culture, media, and infrastructure were all in sync, mutually re-enforcing; stable, but dynamic. The result of such an achievement is a trajectory, or a direction of travel. No historic bloc lasts forever. When such a bloc breaks down, different forces must compete to hegemonise the new state of affairs.

On this basis, what can we say for Corbyn’s Labour? How can we bring the actual parameters of Labour’s political power back into focus? First, we have to emphasise above all that nothing will be quick, and that there is a need to focus on long-lasting processes of transforma- tion. This means a time frame beyond the electoral cycle, where winning long-term power is about more than elections, while simultaneously not ignoring them.

State power without hegemony means no kind of power at all, but Labour must not become a mere ‘party of protest’. This means thinking about Labour in terms of other progressive parties, with the possible need for a much-mooted ‘progressive alliance’ in the future. It also means think- ing about how organisations such as unions, think tanks, social movements, charities, and businesses interact with the party. Working out how to get different kind of organisations to pull together without insisting on some kind of absolute unity implies the need for a new ideology. This must be more than simply a negatively defined project. It needs to be one that is focused on resistance and opposition. While this might be successful in certain individual cases – say, defending a given hospital or library from closure – it can never compete with dominant systemic tendencies.

Hence, there is an absolute requirement for a positive vision at the core of the agenda for a Corbynist Labour. This positive vision should be constructed in relation to future dynamics that are predicted to reshape the UK and the world in coming decades. The two most important of these forces are climate change and the rise of automation in the workplace. The world of 2030, for example, will be a very different one from now. Any successful hegemonic, long-term strategy for the Left will need to account for these future dynamics in some sense. For example, a left-wing party that embraced automation, in conjunction with a universal basic income policy, would be able definitively to portray itself as a future-oriented political entity. The interest already demonstrated by John McDonnell in this respect has been one of the more encouraging aspects of the new leadership of the party.

A fundamental flaw in UK left thinking for generations has been the abandonment of the long-term hegemonic strategy. With the election of Corbyn, a new opportunity arises for a historic re-engagement with an ambitious politics across the Left in the UK. This would, minimally, place an emphasis on long-term change. In addition, it would prioritise the focus of activism and party politics on key dynamic trajectories of the future. It must shift the terms for party politics beyond simply ‘winning state power’, and for activism beyond single issues and ethical localism towards a large-scale project to re-orient the entire platform of UK society. In so doing it should seek to transform the commonly understood ways of seeing – and feeling – what can and ought to be done. It is in the transformation of our political common sense, and the embedding of this new common sense in the UK’s institutions, which will enable the politics of Corbynism to create genuinely transformative change.

- Excerpted from our free ebook essay collection on Corbyn and the Future of Labour - download here.

- Alex Williams is a lecturer in the sociology department at City, University of London. He is the author of the forthcoming Hegemony Now (Verso 2017, with Jeremy Gilbert) and Inventing the Future: Postcapitalism and a World Without Work (Verso 2015, with Nick Srnicek)

- We have 40% off our Essential Labour Reading List until the end of September - download the ebook to get the discount code.