The Centre of a Whirlwind: Watching Whiteness Work

Akwugo Emejulu, Senior Lecturer at the University of Edinburgh, examines the politics of whiteness central to Donald Trump's presidential victory.

Can you see it? Do you now understand its influence and importance? Will you finally realise what is at stake? Many people of colour already understand what is going on because of a learned knowledge that ensures our survival; as Patricia Hill Collins argues, “Black women cannot afford to be fools of any type for our objectification as the Other denies us protections that white skin, maleness and wealth confer.”

I am, of course, referring to whiteness: that political project to defend and enforce the racialised social order of white supremacy. 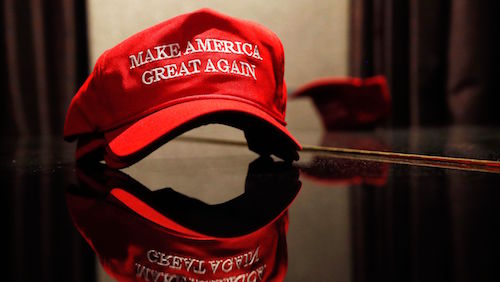 Now, in this crisis of liberalism embodied in the Brexit referendum and Donald Trump’s successful presidential campaign, perhaps the politics of whiteness can be made visible, named and taken seriously beyond anti-racist, anti-fascist and decolonial theorists and activists.

The political theorist Charles W. Mills defines whiteness as an epistemology: a mode of knowledge production that produces social practices about being in and understanding the social world. Whiteness is committed to ignorance: it operates as collective and calculated forgetting, but also as a refusal to know. Whiteness deliberately ignores the conditions for the (re)production of race; and how racial caste systems are intimately entwined with capitalist exploitation and expropriation in the United States and across Europe. It is this ‘knowledge’ that is the foundation of the racial polity.

We must reckon with whiteness: to understand why we need to listen to ‘legitimate concerns’ about immigration, to grasp why only white people seem to be included in that slippery social group ‘the working class’ and to make sense of why it seems only white people are experiencing economic insecurity and hardship that structure their anxieties about an uncertain future.

Despite the very real and persistent experiences of economic insecurity of Native, Black and Latinx Americans, people of colour’s experiences are excluded when the media and pundits discuss ‘economic insecurity’ in relation to the US Presidential elections. Real incomes for working and middle class Americans have remained stagnant since the late 1970s and the wealth gap between rich and poor is ever-growing – but the racial caste system distributes the effects unevenly. Black Americans of all classes, for example, experience a persistent racial income and wealth gap in relation to their white counterparts. Indeed, as Ta-Nehisi Coates has reported in great detail, Black Americans must negotiate a thicket of discriminatory housing policies and covenants that undermine our ability to accumulate wealth. Further, Black Americans’ modest wealth gains from the late 1990s onwards have been completely wiped out by the 2008 economic crisis. The racial wealth gap, combined with the flight of jobs overseas, the erosion of real incomes and institutionalised labour market discrimination have been disastrous for the incomes of many Black households.

Excluding the poverty of people of colour, or rather, the racist system that keeps these groups in poverty, from discussions of economic insecurity enables a facile argument about the relationship between working-class precarity and far right ideology. This narrative requires the expulsion of the non-white Other from the white imagination in order to function. For example, the failure of the Trump campaign amongst the Black working class disrupts the idea that ‘working class’ resentment underlies the rise of far right/proto-fascist politics – thus Black working-class people must be discounted from accounts of ‘authentic’ working class experience.

That Black poverty can be erased in discussions of economic insecurity in America but can be also be exploited to re-enforce the naturalness of Black inequality and otherness is whiteness, as an epistemology, at work. The politics of whiteness make people of colour both invisible and hypervisible, reinforcing the racialised social order. President-elect Donald Trump has expertly wielded this power, abandoning the innuendo and dog whistles of mainline Republicans to make an explicit, unapologetic and decisive play to protect and defend white supremacy. Indeed, his trademarked political slogan, ‘Make America Great Again’ imagines a future America where people of colour know their place, or better yet, are completely absent. The Trump campaign cannot simply be understood only as a triumph of populism – this populism is achieved through the enactment of whiteness.

In Black Reconstruction, W.E.B. Du Bois discusses the importance of the ‘psychological wage’ of white domination, from which poor whites benefit. Trump’s pledge to build a wall at the southern US border, the commitment to deporting 11 million undocumented migrants and the rolling back of various social protections and civil rights of marginalised groups is his attempt to pay out a psychological wage to poor and working class whites, thus securing white popular consent for existing capitalist relations.

Whiteness is always inflected by class and gender. Trump’s election reasserts a recommitment to the economic order of white groups as well as white male supremacy. According to the CBS exit poll, overall, Trump won the support of white women, particularly those who are non-college educated. Clinton won the vote of a majority of college educated white women. It is important to note that those white women who voted for Trump did not ‘sell out their gender’. Rather, we must understand this vote in terms of white women’s racialised gender identity in which they gain social and economic power through the privileged status that whiteness confers. Some white women benefit from their proximity to white men and are active and willing participants in upholding the racist social order.

The Trump victory will embolden and give succour to reactionary forces seeking to reverse the modest social and economic gains of LGBT groups, people of colour, women, and especially those who exist at the intersections of race, class, gender, sexuality and legal status. In Brexit-era Europe, the Trump victory offers psychological dividends of possibility for the far right in elections in Austria, the Netherlands and France: that fear and hatred of Muslims, of refugees, of the Black Other can be successfully leveraged yet again for political power.

The Trump victory, like the Brexit vote which foretold it, represents a crisis of capitalist liberal democracy. We are at the centre of a whirlwind of a white political imagination that cannot and will not fathom humanity, justice and equality outside of itself.

Dr. Akwugo Emejulu is Senior Lecturer at the University of Edinburgh. Her co-authored book, The Politics of Survival: Minority Women, Activism and Austerity in France and Britain is forthcoming with Policy Press.