What are the implications of Brexit for workers’ rights? Gracie Mae Bradley examines how state power creates a paradigm of juridified dispossession where government immigration law and policy tacitly sanction the exploitation of migrant workers, while at the same time encouraging a ‘hostile environment’ extending into the fabric of daily life. Brexit’s legal challenges threaten the rights of migrant workers further, but where there is fragmentation and change, new possibilities for solidarity and resistance can emerge.

Gracie Mae Bradley is a human rights worker and sometime writer. She is a Project Manager at the Migrants' Rights Network and also helps coordinate the Against Borders for Children campaign.

When we talk about workers’ rights, which workers and which rights do we really mean? Legal rights are only one component of justice and the good life, and the law itself does not contain all that is meaningful about rights. But Brexit has pitched workers into a battle with the UK government to prevent it from rolling back long-held employment rights once Britain leaves the EU, and resistance must take into account the law as much as government policy, politics, or what is happening in the streets. 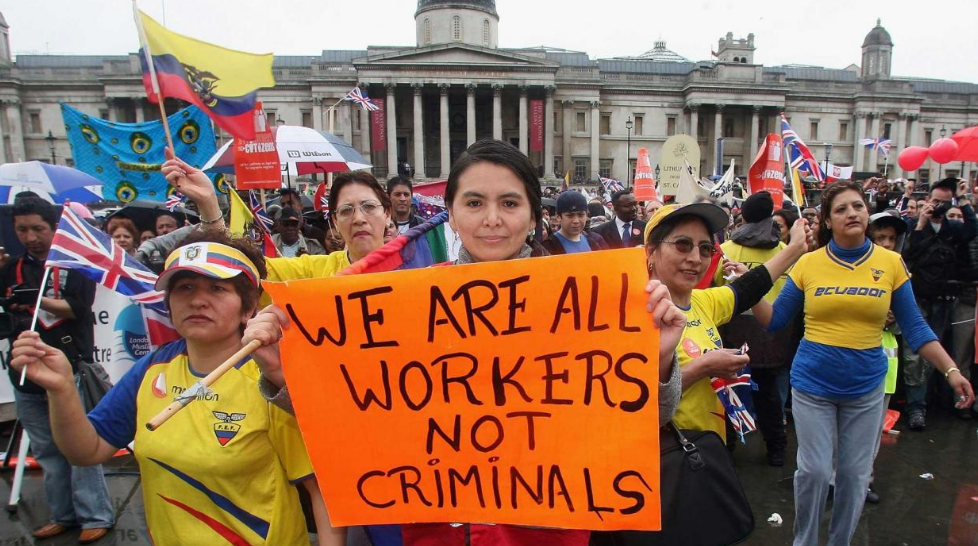 Theresa May has vowed to end the European Court of Justice’s (CJEU) jurisdiction in the UK: the Great Repeal Bill (GRB) is an historic proposal to end the authority of EU law and ‘take back control’. On ‘Brexit day’, EU law will be absorbed into UK law “wherever practical.” Of course, what is practical for the government is not necessarily practical for workers.

Most of the protections granted by EU membership – written statements of employment terms and conditions, paid holiday, annual leave, parental leave, limited rights for agency and fixed term workers – are part of UK domestic law and are not under immediate threat. However, once we leave the bloc, existing legislation can be scrapped and changed in line with vested interests in getting rid of EU directives protecting workers’ rights. Judges will no longer be obliged to follow precedents established by the CJEU, including those relating to compensation payments (the Marshall case) and annual leave entitlements (Pereida, Anged). And while Britain had anti-discrimination laws prior to and independent of EU membership, existing protections conferred by the Equality Act have, to borrow a metaphor, been hauled forward by the engine of EU anti-discrimination law. Perhaps most ominously, May also plans to implement a manifesto commitment to repeal the Human Rights Act: a domestic law independent of EU institutions that protects rights to be free from slavery and forced labour (Article 4), to join a trade union (Article 11), and to be free from discrimination (Article 14). In sum, in the words of the Prime Minister, following Brexit, Parliament “will be free to amend, repeal or improve any law it chooses.”

While it is worth acknowledging what we stand to lose, it would be a gross overstatement to suggest that Britain’s membership of the EU represents a halcyon era for workers’ rights. One need only look at the exposés of conditions in the warehouses of Sports Direct and ASOS, the struggles of ‘self-employed’ workers in those powerhouses of the gig economy, Uber and Deliveroo, and outsourced workers in universities and retailers struggling for fair pay and conditions in increasingly precarious employment conditions. 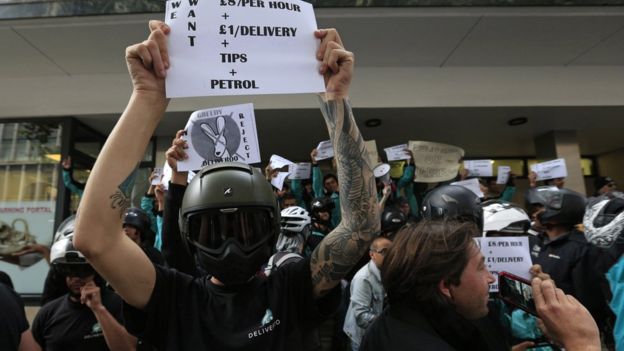 Migrant workers, both documented and undocumented, are especially at risk of discrimination, labour abuse, exploitation and police and state violence. Police raids recently targeted undocumented migrant sex workers in Chinatown and Soho, while Byron recently handed over its own employees to immigration officers rather than exercising the statutory defence all employers have under the law for unknowingly employing irregular workers. Meanwhile, cuts to legal aid have made immigration cases for people not in detention ineligible for legal aid funding. With hikes in employment tribunal fees, there are now near-insurmountable hurdles to access justice for the poorest and most vulnerable migrant workers.

The rumblings in the ether thus far suggest that EU migrant workers who are already in the UK will be allowed to stay, as the majority will meet the criteria for permanent residence by the time Britain leaves the EU, and because the government needs to secure the rights of Britons working overseas. The question is, under what conditions will EU nationals be allowed remain, and further, what conditions will be imposed on those who are yet to arrive. Like people coming from non-EU countries, EU migrants after Brexit are very likely to hold a conditional immigration status linked to a visa or an employer, rather than free movement rights under EU law. More people will find themselves dependent on their employers for access to public goods and services such as housing and healthcare, and will be more likely to move between documented and undocumented status.

Thanks to a deregulated labour market, workers who are dependent on their employers, or undocumented or at risk of becoming so, are at greater risk of exploitation both inside and outside of the workplace. What is known as the doctrine of illegality prevents undocumented workers from taking their employers to court, and fear of deportation prevents them from going to the authorities to seek remedy for abuses in other areas of life. State power creates a paradigm of juridified dispossession: far from slipping under the radar or through the cracks, migrant workers, particularly undocumented ones, find themselves trapped in a cycle of discrimination, abuse and exploitation that is tacitly sanctioned by government immigration law and policy.

In the coming months and years, the regime of immigration control will only become sharper through joint operations between the police, Home Office, and other agencies. For example, research by the Radical Housing Network has revealed that money released to local councils to tackle ‘rogue landlords’ and ‘beds in sheds’ actually funded immigration enforcement against tenants. Operation Nexus, a Home Office-police partnership, enables deportation based on police intelligence even when the ‘evidence’ has never been tried in a criminal court – a racist system that is heavily vulnerable to miscarriages of justice.

All of this is not to mention the relentless day-to-day machinery of border enforcement, with the “hostile environment” now permeating virtually every sphere of life: landlords, schools, health services, the DVLA and banks now check nationality and/or immigration status, in some cases sharing data with the Home Office. The government’s ‘Controlling Migration Fund’ includes £40 million for enforcement purposes, entailing more raids, more deportations, and more families and communities separated.

So what should the response be? The government appears to be single-mindedly committed to reducing and controlling migration, even at the expense of membership of the single market. The position of the Official Opposition is unclear: it has mustered some scattered condemnation of xenophobia but continues to lend credence to the view that immigration controls are necessary, and that migrant workers drive down wages and job prospects for British workers, despite the dearth of evidence to support that view. Advocacy that is splintered according to sector, region, and group – note proposals for a ‘London visa’ – is gathering pace. The risk is that rather than recognising that Brexit presents a threat to the rights of every worker and therefore a moment for a solidarity that has previously been absent, trade unions, political parties and civil society will accept concessions for certain workers that sell others – invariably migrants – up the river, as has already been the case for far too long. 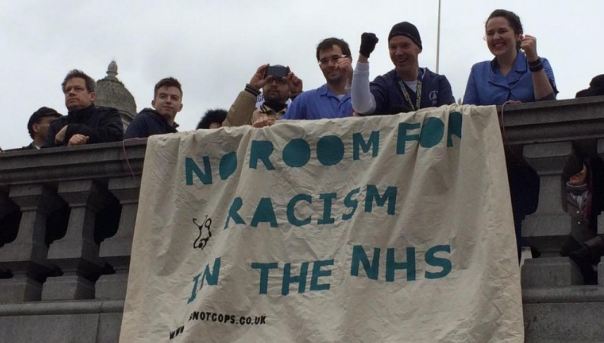 Whether or not coordinated resistance between institutions such as trade unions and the Labour party is probable or even possible, one point is crucial: immigration enforcement requires collaborators. Employers are not legally required to collude with Home Office attempts to entrap foreign workers, and it can be made politically and financially toxic for them to do so. Health workers and educators are already refusing to comply with government attempts to require them to check identification documents before allowing access to services. This civil disobedience should be amplified. If the months after the EU referendum have seen a huge rise in hate crime, it is worth remembering that anti-racist and anti-fascist resistance in the streets must also fight the violence of the state as it attempts to extend borders into the fabric of our daily lives.

While some might look to statutory agencies to stand up for workers’ rights, through measures like enforcement of the National Minimum Wage through civil and criminal sanctions, we cannot accept protection of the rights of some workers that acts as a proxy for border control against others. And in any event, resistance should be located outside of, or at the very least, should not be reliant upon, existing structures that have failed migrant workers – and that includes large trade unions and almost the entire political establishment as well as statutory bodies.

Glimmers of hope for workers' rights and migrant solidarity shine through in the movement of grassroots, member-led unions, United Voices of the World and Independent Workers Union of Great Britain; in the protests at collaborator employers such as Byron Hamburgers, and in the national boycott campaigns of Docs Not Cops and Against Borders for Children. Brexit on the terms of a Conservative government is no opportunity for workers’ rights, let’s be clear. But it does make clear that the position of migrant and precarious workers has been parlous for far too long, and will be further undermined. But where change looms, there is space to act and shape the outcome. From Brexit, new axes of solidarity may emerge.

This essay draws from a workshop led by Gracie Mae Bradley and Petros Elia at a conference held alongside the Grunwick 40 exhibition on migrant workers, trade unions and the new economy.