Cruising in the End Times: An Interview with Che Gossett

Che Gossett is a black trans femme writer whose work draws out the connections between blackness, animality and abolition. Their writing forces us to re-examine power’s machinations, most famously in their cutting critique of Zizek on trans issues in the Los Angeles Review of Books.

We started to discuss all this in relation to gender several months ago. Much has changed during the time that we have been emailing. 36 people were killed in the fire at the Ghost Ship warehouse in Oakland, many of them queer and/or trans. Standing Rock Nation protesters fought against the planned 1,172-mile Dakota Access oil pipeline, which would poison the water they depend on. And Donald Trump won the US Presidential election on an openly fascist platform.

For these and many more reasons, the end of 2016 has felt apocalyptic. Yet this is perhaps not so much as a change, as a re-emergence of what was always already there. As the self-described ‘theory queen, para-academic, writer and trans-femme’ points out: “the white supremacist nation of America... is not broken – it was built this way.”

This interview is the first in an occasional series about gender and technology on the Verso blog, guest-edited by Ray Filar. 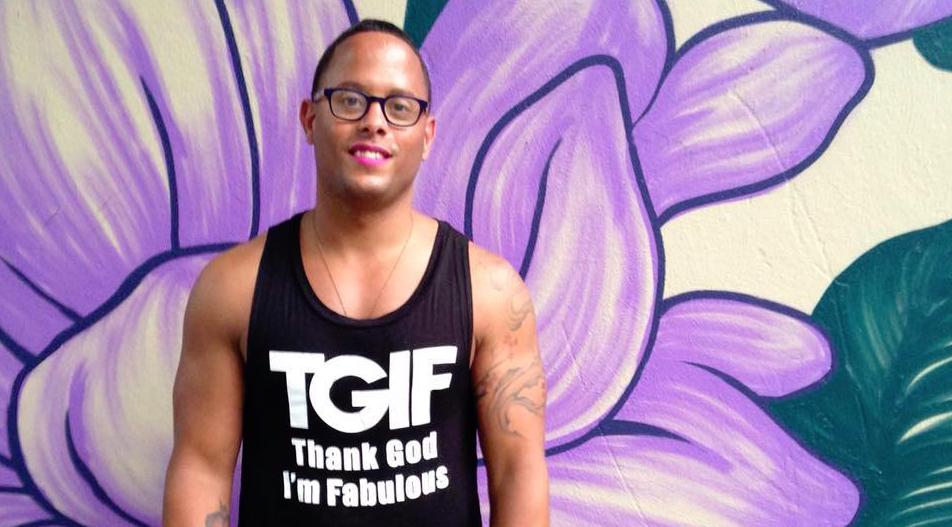 RF: In your fantastic essay on Zizek's Trans/gender Trouble, you write: “Blackness troubles gender. As non-sovereign and metapolitical, Blackness makes for gender trouble.” I tend sometimes towards a pro-technology view of the future of gender, in which I envisage common ownership of automation and a move towards cyborg-bodies as providing increasing liberation from gender.

But you might also say that gender is an oppressive technology that instils hierarchy and power in and between certain bodies, also along lines of race, nationality, class, ability, sexuality; and so on. So technology can be both liberating and oppressive, and power and control are key to this.

I was thinking about this with reference both to blackness that troubles gender as a white supremacist technology, and to blackness also perhaps as a technology of disruption. Perhaps you could explain a little more on what you mean by blackness troubling gender?

CG: I recently did a workshop at the Arika programme in Glasgow, Scotland on blackness, animality and the non-sovereign, where I opened with a gif of Juliana Huxtable, who also performed at Arika. I deeply appreciate her brilliance and humor and the poetic lyricism of her work. In the gif Juliana responds to being asked "What's the nastiest shade you've ever thrown?" She replies: "Existing in the world." I wanted to think collectively about how blackness and abolition transform “the world” and what it means to live in it.

Another way of saying this is that blackness and abolition are the refusal of power’s grasp. Blackness and abolition move us beyond the imposed binaries—from the gender binary to the human/animal binary. The violence of the gender binary has been imposed on us via the settler colonial site and bio and necropolitical laboratory of the slave ship and the plantation complex. Blackness is positioned epistemically and ontologically outside of the category of the human and in proximity to the animal as beast. It troubles both. The human is predicated on the inhuman, in order for the human to be sovereign, others must be cast outside its domain.

I’m interested in how blackness, positioned as the ground for the liberal and human subject—which Saidiya Hartman brilliantly illuminates in her work Scenes of Subjection—is in proximity to the animal as property. There is also a relationship between fungibility of the enslaved—as Hartman also discusses—and the fungibility of the animal under the regime of racial and animal capitalism.

RF: Before you go on—for readers who perhaps haven’t read a lot of critical theory—how would you explain bio and necropolitics in the sense of the slave ship and plantation complex?

CG: In “Necropolitics”, Achille Mbembe expands on Foucault’s conceptualization of biopolitics, which is about how power regulates and manages life.

Mbembe begins by inquiring whether Foucault’s concept of ‘biopolitics’ accurately reflects the capacity of the state to regulate the lives and deaths of its subjects.

Is the notion of biopower sufficient to account for the contemporary ways in which the political, under the guise of war, of resistance, or of the fight against terror makes the murder of the enemy its primary and absolute objective? Imagining politics as a form of war, we must ask: What place is given to life, death and the human body (in particular the wounded or slain body)? How are they inscribed in the order of power?

Mbembe therefore relates the politics of life to the politics of death. He traces a critical genealogy that centers the colonial apparatus of the slave ship and the laboratory of the plantation—extending outward to the historical present of Palestinian occupation. He argues that “any account of the rise of modern terror needs to address slavery—which could be which could be considered one of the first instances of biopolitical experimentation.”

He illustrates how the genocidal pre- and protohistory of the Holocaust (racial slavery, Native genocide, concentration camps in Namibia, for example under German colonialism, which Hannah Arendt also mentions in The Origins of Totalitarianism) sets the stage for the violence of the Holocaust and how this is part of a racial, carceral, colonial continuum of genocide and annihilation. W.E.B Du Bois and Aimé Césaire and Frantz Fanon also reinforce this very point in their vast and brilliant work(s).

RF: So, as you say, blackness is the refusal of power’s grasp and in so doing moves us beyond the gender binary to the human/animal binary—can you expand on that?

In Red, White and Black, Frank Wilderson observes that “the Black is a sentient but not a human being.” Sentience is also a category through which the animal is seen since Jeremy Bentham’s question as to whether animals suffer. This is part of a liberal humanist project of empathy, which never extends to the black—think of the virality of black suffering circulating always on the internet, this is the digital afterlife of slavery. Technologies have changed but the anti-black violence remains.

In his essay “Gramsci’s Black Marx” Wilderson observes “But still we must ask, what about the cows? The cows are not being exploited, they are being accumulated and, if need be, killed.” I think it is really interesting and important that Frank Wilderson’s explicitly references animal fungibility when he is discussing the fungibility of the slave.

Afro-pessimism really forces us to think critically, and as Wilderson says, “unflinchingly” about the anti-black foundational violence that worlds the world and this is incredibly important. Reading Wilderson really helps me to “stay in the hold”. For me this has meant really grappling with the ways that anti-blackness undercuts attempts at “solidarity” and community” and how this is painful and outraging. To really sit with those feelings without trying to maneuver out of them or disavow them, in any pragmatist or programmatic fashion. Wilderson begins in the social truth that, as Frederick Douglass remarked, we live in a world in which “no slave can breathe.”

As Fred Moten attests in In the Break: Aesthetics of the Black Radical Tradition: “blackness is a testament to the fact that objects can and do resist.” Blackness forces a rethinking of the coordinates of “post” humanism and new materialism, blackness takes us beyond the subject/object divide as dark matter and vibrant matter—as Moten says, blackness “is a strain that pressures the assumption of the equivalence of personhood and subjectivity.” The category of the human—as anti-black, settler, ableist, anti-queer/trans—is the condition of possibility for "post"humanism.

RF: How would you describe your work?

CG: My work is generally connected to activism and previous work I've done has been on Black and Palestinian solidarity, queer of colour AIDS archives and the necropolitics of HIV criminalization.

What I'm working on now in my graduate work is a project about abolition, blackness, Palestinian solidarity and animality, tentatively titled ‘Blackness, the Beast and the Non Sovereign’. My project is also about Palestinian activism and interspecies occupation—the work of animal welfare activists in Ramallah, for instance, against bio and necropolitics of settler colonialism, as an interspecies affair and animal rights and vegan washing of the IDF and the violence of the occupation.

My project engages Derrida's work, not only on the animal, but also in connection to black radicalism (his writing on George Jackson and Mumia Abu Jamal). I've been thinking about abolition—as the gift of Black folk—and the ways that it problematizes and undermines the human/animal boundary and performs as a social ontology through which we can dismantle policing and prisons, borders and cages.

The sites and archives that I’m focusing on are the zoos in Gaza, animal rights activism in occupied Palestine and the militarization of veganism by the Israeli Defense Force (IDF). The IDF has embraced veganism and animal rights washing, while their bombs have caused interspecies death, disablement and trauma. To date in the West Bank (at least) there exists only one animal rights organization, started in 2011, the Palestinian Animal League. The Palestinian Animal Rights league, like Fanon, sees speciesism as imbricated with settler colonialism and decolonization as part of a broader question regarding what Fred Moten calls “ethics of accompaniment.”

Both animal and Palestinian persons lifeworlds are limned and threatened by a settler colonial imposed and racialized horizon of death. Fanon's "combat breath" indexes the belabored breath of the colonized animal as well as the colonized Palestinian under the duress of the bio and necropolitics of occupation. A guiding question for my work on Palestine and decolonization as interspecies is: what methodology is needed for a project of solidarity?

RF: You say “abolition is the gift of Black folk”. What does a trans, or specifically trans of colour, abolitionism look like? And how does it relate to classic women of colour-led theory and action around prison abolition?

CG: Abolition speaks to the unfinished project of ending anti-Black racism, racial capitalism, anti-trans, anti-queer, patriarchal policing, colonialism, and caging.  It emerges out of the ongoing black freedom struggle and the gift of it is its open horizon of thought and being and worlding.

I’m answering these wonderful questions in the midst of the catastrophe that is the election of Donald Trump, which reveals so much about the white supremacist nation of America, which is not broken – it was built this way. We are also seeing the infrastructure of mass deportation from the Obama presidency being capitalized on by incoming Trump administration. I have been thinking about how for queer and trans people of colour, we have in many ways, always been cruising in the end times and will continue to. Cruising dystopia.

I think too that abolition is always already about ecology and we continue to need and demand an abolitionist ecology. This is true especially in the face of accelerated climate change which actually ties directly into the prison industrial complex and in the face of racial capitalism that forecloses all forms of life through caging and killing and rendering human and non-human life forms as surplus and disposable.

We remain in the face of bio and necropolitical violence of killing, borders and cages—as Miss Major says, “still fucking here” in all of our insurgent and anti-proper forms of living. This gives me hope.