Since 2015, we've seen the deterioration of refugee rights across the world and growing hatred towards them. Corporations sense the public mood and political opportunity and behave accordingly. 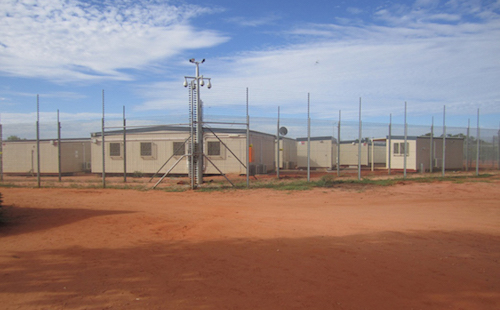 The unaccountability of privatised immigration had rarely been so brazen. Australia is the only country in the world to have fully outsourced the detention of all asylum seekers to the private sector. In January, its officials were found to have spent $2.2 billion on offshore detention without necessary authorisation. The Australian National Audit Office damned the Department of Immigration and Border Protection for handing out contracts to corporations on Manus Island in Papua New Guinea and Nauru in the Pacific that established dangerous and excessively expensive facilities.

The story broke over a long, hot Australian summer. After a few days of headlines, the issue disappeared down the memory hole. No ministers or authorities were fired or reprimanded. Although the wasted billions of dollars were taxpayers money, the public outcry was almost non-existent because many Australians supported its country’s draconian treatment of refugees in far-away, secretive camps. Almost any amount of money is justified to manage these fears and prejudices. Occasionally, journalists report from Manus Island, including Roger Cohen from the New York Times, who reveal the horrors inflicted by indefinite detention on the hundreds of refugees trapped there for years, but too few reporters make the journey.

For more than 20 years, Australia has devised increasingly harsh penalties for asylum seekers who claim their legitimate right to request asylum when fleeing repressive regimes. These are often states that the Australian government has waged war against such as Iraq and Afghanistan. Corporations such as Serco, G4S, Ferrovial and International Health and Medical Services, amongst many others, have made huge amounts of money from the warehousing of refugees despite decades of evidence proving inadequacy and criminality. Boycotting and targeting these firms should be the priority for every committed citizen.

The political winds around the world in 2017 indicate a hardening of minds and hearts towards refugees and Australia has become a global model in how to isolate, target, privatise and demonise asylum seekers. The EU now wants to establish centres in northern Africa, including in war-torn Libya, to process refugees. This is a carbon copy of Australia’s off-shoring of asylum seekers in remote locations away from prying media.

Australia nationalists must be so proud. As I wrote in the Guardian in early 2016:

In early 2014 I called for UN sanctions against Australia for ignoring humanitarian law and willfully abusing refugees in its case both on the mainland and Nauru and Manus Island. I still hold this view but must recognise facts; the international mood in 2016 for asylum seekers is hostile. As much as I’d like to say that my homeland is a pariah on the international stage, it’s simply not the case.

When Denmark recently introduced a bill to take refugees’ valuable belongings in order to pay for their time in detention camps, this was remarkably similar to Australia charging asylum seekers for their stay behind bars. Either directly or indirectly, Europe is following Australia’s draconian lead.

It’s not hard to see why. In the last few years, many European leaders and the European Union made a conscious decision to belittle asylum seekers and make their lives miserable. Unaccountability rules. In my book, Disaster Capitalism, I investigate the reality for refugees in Britain and Greece during these challenging times. It’s only getting worse. Think of the recent, shocking images of refugees freezing and dying in the Balkans and Greece, unwanted and ignored.

It’s a humanitarian catastrophe with men, women and children fleeing Syria, Iraq, Afghanistan, Libya and Africa. But it’s also a unique way to make money. A revealing report released in late 2016 by the Transnational Institute and Stop Wapenhandel, Borders Wars, found that profits were soaring in the defence and border security industries. The EU border management organization Frontex had a 2016 budget of €238.7 million, a 67.4% increase compared to the €142.6 million in 2015. The report went on:

It [the Frontex budget] is expected to grow to an estimated €322 million in 2020, 50 times its budget of €6.3 million in 2005. The 2016 budget for the EU’s Internal Security Fund was similarly increased by €116.4 million in October 2015 to a total of €647.5 million. A substantial proportion of these budgets have benefited arms and security corporations in a border security market that is growing at roughly 8% a year. Airbus, Leonardo, Safran and Thales were all in the news in 2016 for border security contracts. IT firms Indra, Advent and ATOS won significant contracts for projects to identify and track refugees.

Furthermore, security fences are being built on many European borders, benefitting private firms with the expertise in building them (including from Israel with years of caging Palestinians). The Israelification of security is already upon us, with Western police and army getting training from Israeli forces who have decades of experience occupying, targeting and isolating Palestinians in the West Bank and Gaza. In the last years, Israeli firms have expanded their global reach, exploiting the worldwide desire to copy the Jewish state’s treatment of minorities and its own Arab citizens. The Trump administration is likely to hire Israeli companies to build a wall along the Mexican border.

Mistreating refugees rarely incurs a political price in the 21st century. From Britain to Australia and Afghanistan to Germany, officials are increasingly tasked to look “tough” in the face of legitimate asylum claims. Far-right populism, infused with rampant nationalism, patriotism and anger, has supplanted any strong and viable left-wing alternatives. There are exceptions, of course, but the current worldview trend is towards insularity and punishment of the least fortunate.

President Donald Trump’s announcement to withhold visas for people coming from select Muslims nations – not coincidentally places that the US has bombed for years – is not affecting close US-allies like Pakistan and Saudi Arabia with a higher level of extremism. Along with aggressively kicking out refugees already in the US – many of whom are fleeing US-backed, repressive states such as Honduras, where I visited last year – Trump and his government are heralding an extreme version of disaster capitalism. Private prison companies are licking their lips with joy. Rich Silicon Valley types are preparing for the end of the world by buying living quarters in redesigned, underground nuclear bunkers. Their tech utopianism apparently has its limits; they fear societal breakdown.

Since my book Disaster Capitalism was released in 2015, I’ve witnessed the deterioration of refugee rights across the world and growing hatred towards them. Corporations sense the public mood and political opportunity and behave accordingly. For example, European Homecare (EHC) is a German company employed by the German government to manage asylum seekers but it’s been engulfed by scandal. In late 2016, a Syrian refuge living near Dusseldorf emailed me information, photos and videos about the abuses being committed by EHC that he had personally witnessed when in detention.

Every person had a small room with no locks 'because they cost too much' and you can't put locks over the locker to keep your important documents and stuff because it was forbidden and we had something called control. Every morning around 6 am till 8 am, security members and a social worker from EHC enters everyone's room and look through all the personal things and ask for ID. Sometimes even at midnight. But the daily control happened every morning. Although it's a military base with perfectly secure gates, security cameras, electric fences and over a hundred security staff, it was tough and humiliating for about 3 months. Not mentioning the multiple times we had robberies inside the camp nearly everyday because of their policy on locks. So you're basically in the middle of nowhere by the borders. The nearest market is in the Netherlands and you're not allowed to go there. But you can walk 3 hours back and forth to get your grocery locally. No network coverage. And worst of all was the water issue. You start your day with the lovely control and then head to shower with mud, followed by a nice walk to the cafeteria for a meal. For each meal you have to walk 2 km to get to the cafeteria inside the camp. Of course you need to manage hiding your personal belongings while being away from the room. … The bottled water we had was extremely high in minerals and from a personal experience I know what damage it can cause to the infant's kidneys. It's absolutely not meant for babies.

In an age of walls, militarised fences and attacking minority rights, refugees are both the most vulnerable and easiest target for insecure populations and desperate politicians. Rich, Western democracies sending back asylum seekers to danger, a trend perfected by Israel, Australia, Britain and Germany despite its illegality, is surging. It’s why civil disobedience, company boycotts and divestment and more direct action is essential to resist the global war on asylum seekers. It’s unsurprising that nations with a colonial past, such as Australia, Britain, the US and Israel, are leaders of the pack.

Antony Loewenstein is a Jerusalem-based, independent journalist who has written for the Guardian, the New York Times and many others. He is the author of many books including his most recent, Disaster Capitalism: Making a Killing Out of Catastrophe, now out in paperback.