Playing Oppression Against Class: the Neoliberal Legacy in the Age of Trump

This post by Tithi Bhattacharya is adapted from a longer essay forthcoming in Cultural Dynamics. 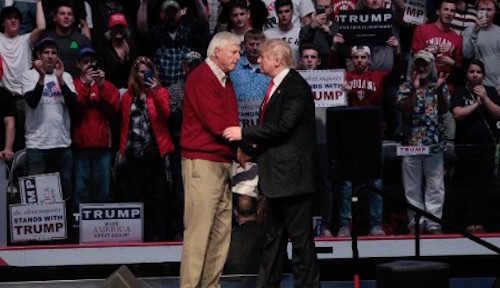 The morning after Trump won, the Washington Post led with the story that the president elect had won 58 per cent of the White vote, outperforming “in majority-white areas." Similarly, the Guardian embellished on this bete noir of the “white working class”: Apparently it was the “angry” white working class that helped Trump to a “stunning win”.

"Mary" is a housecleaner on $12 an hour and no benefits. She is mother to four children, one of them disabled. She is white and about 30. She voted Trump, because, she told me, she “could never vote for Hillary. She sounds like my boss, John. I feel she is lying all the time.”

“No one in my town has jobs” Mary continued:

Warren county, Fountain county, every house has more unemployed people than ever. The Ford factory near Bloomington was where many of my family members worked. My uncle Frank worked there for 32 years. They let him go with 6 months of pay. He had never learnt to do anything else. If Trump lowers the taxes, maybe Ford will come back again? All I want is people to have jobs. ...

you know, he has three bankruptcies to his name, like many people I know, but he always manages to bounce back and have money. maybe he will teach us how to do it. Hillary has never had to worry about money.1

“Mary” saved her most stunning comment about the elections when I asked her about Trump's comments about women and people of color: “If I was alone in a room with him” said Mary without a moment’s hesitation, “I would hit him. I can't stand him."

Like Mary, many workers of the Momentive chemical plant, in Saratoga county in New York, had voted for Trump because of his economic promises. The workers are currently on strike at the plant, part owned until recently by Trump’s choice for “job czar”, the hedge fund billionaire, Stephen Schwarzman. The workers are striking against wage cuts and the slashing of health care and pension benefits. Striking worker Carmine Cervini, 61, in an uncanny echo of Mary’s words, told the media, “Trump promised to help America, to get us good jobs. Well here we are, fighting for our good jobs. I voted for him. I’m going to give him a chance.”

Commonsensically, there are two explanatory tropes for this class-logic of the Trump voter.

The first is, what I shall call, a class-against-race argument. As the Washington Post report above claimed, white workers voted for Trump because they are racist.

The second trope is similar but with a significant twist, which I shall call the class-above-race argument.  A recent Guardian article, ludicrously titled,  “Trump is no fascist. He is a champion for the forgotten millions”, summarizes it well: “America” this argument goes, “is divided between the elites and everybody else, and Trump’s election was a rejection of the elites”.  In other words, it was a "class" vote by the white working class, faced with the depredations of neoliberal capitalism, and general economic decline.

The most substantial response to this eternal perdition of the white working class has been provided by Kim Moody. Moody shows that despite the fact that Trump got 58 per cent of the white vote, and irrespective of the fact that he won the key "rust belt" states, it was “upper-income groups” who “were overrepresented in the voting electorate as a whole, and both candidates drew a disproportionate part of their vote from the well-to-do, with Trump a bit more reliant on high-income voters.” Indeed, even the Economist, not known for its defense of the working class, concluded that “the idea that it is the mostly poor, less-educated voters who are drawn to Mr. Trump is a bit of a myth."

But as the comments of the various workers above show, a section of the white working class, albeit small, did vote Trump.  This lived experience of the US working class encapsulate:

(a) a general set of social relations capitalism generate; and (b) a very specific ideological work neoliberalism has done, both of which we need to be particularly attentive to in this period.

To the first, capitalist social relations generate both collective solidaristic action and other opposing forms of practices that pit sections of the working class against one other. The very nature of accumulation dictates competition within the working class and ensures that previous histories of race and gender are reinvented and recrafted to serve capital. Robert and Johanna Brenner’s analysis of voting patterns within the working class during the Reagan era is relevant here:

workers are not only collective producers with a common interest in taking collective control over social production. They are also individual sellers of labor power in conflict with each other over jobs, promotions, etc. This individualistic point of view has a critical advantage in the current period: in the absence of class against class organization. It seems to provide an alternative strategy for effective action—a sectionalist strategy which pits one layer of workers against another.

Michael McCarthy’s insightful essay on race and the labor market elaborates on this. McCarthy demonstrates that apparently race-neutral, "purely economic" processes are anything but. Periods of capitalist boom and bust intensify existing competition and often threaten the economic position of those workers — in the US, usually white — who, for historically racist reasons, held better paid jobs.  Such competition, although created in a new context, use historically available racist history and tensions to divide workers. “Far from dissolving racial inequality” McCarthy shows, “these market processes reproduce it." 2

While these processes are always true of capitalism, it is worth paying attention to political forms specific to the neoliberal moment that exacerbates and consolidates these structural imperatives of capital.

While agreeing with the mainstream media’s rust-belt-decline thesis, I would propose that the decline in wages and living conditions for the US working class in the last forty years of neoliberalism has had a special inflection. I have argued elsewhere how in these decades, capital has waged a class struggle against the working class (both nationally and globally) in two related ways: one, at the point of production or in workplaces by breaking unions; and two, by attacking the means by which the worker needs to replenish her labor power: through food, shelter and social services. Further, that since capital has so far been fairly successful in achieving the first, much of working class struggle in the neoliberal period, at least in the Global North, has taken place in the sphere of the second — in fights for food, water, shelter, schools and healthcare.

The decline or near absence of workplace struggles in the US, then, does not mean there has been no “class struggle," rather that the boundaries between "social" and "wage" struggles have been blurred as the working class, having been largely defeated at the point of production, has tried to defend lives and communities at points of social reproduction.

The mythology of class versus social struggle, however, has been sustained by capital in a number of ways.

Prominent in this strategy has been to equate all language of class with white workers, while sectoralizing social issues (read race, gender) as the purview of racialized people.

In reality, the US working class today is pervasively multiracial. Even union membership, as low as it is, shows that black workers are more likely to be union members than white workers.

Second, neoliberal rhetoric, particularly in the US, has violently and grievously severed conceptualizations of race, gender, sexuality, etc. from class. For every oppression that capitalism produces, the neoliberal moment has produced its uncanny, simulacrum-solution. For instance, for sexism there is on offer as a solution, lean-in feminism, for racism, there is pull-up your pants.

I call them an uncanny simulacrum to the oppressions themselves because they appear to be their solutions while in reality strengthening their grip on society. Women like Sheryl Sandberg (net worth $1.3 billion) have been hailed to have reframed “discussions of gender” and “rebooted feminism,” while the US remains one of four countries in the world that lacks any paid maternity leave and whose levels of child and maternal poverty are much higher than other parts of the industrialized world. Similarly, the last eight years of a Black Presidency has seen an alarming rise in the cold-blooded murder of Black men by forces of the state, while mass incarceration has ensured that there are more Black men in prison than were slaves before the start of the Civil War. Yet, one of the more memorable phrases of the first Black President remains, “brothers should pull up their pants.” As my comrade Keeanga-Yamahtta Taylor has remarked about this vision of respectability politics, “[a]s if the best parenting…or the best-fitting pants in the world can bridge the financial gap between the $11,000 a year the U.S. spends on public school students and the $30,000 the U.S. spends to keep someone in prison”.

Let There be Mass Ungovernability

So where do we go from here?

The Democratic leadership are leading the way in trying to rescue the institution of the US presidency from both the monstrosity that is Trump and the greater danger that is the mass struggle that has erupted since his inauguration. After an year and half of denouncing him they are asking us to raise the White Flag. Against this we should raise the Jolly Roger and vow to become utterly ungovernable.

Over the inauguration weekend, 3.3 million people marched across this country. Many carried socialist banners, many carried Palestinian flags, many carried their children carrying beautiful handmade signs. Some of us are now involved in rekindling the spirit of International Women’s Day on March 8, long lost in this country, and calling for mass action against the regime.

Besides such mass actions, there are some other political questions that we need to urgently think through. Our discussion of how neoliberalism tries to strip oppression of its class content in order to injure both, should alert us towards a unitary and more discerning politics of both class and oppression. We need to challenge the emptyness of neoliberal "diversity" and fill it with uncompromising antiracism, antisexism.

But all of such acts need sustenance, for the night of the bourgeois political process is long. And here we need to talk about organization. What kind must it be? How can we assure that such an organization will sculpt and wield our insurgency and not re-teach us submission?

This question of organization is one of our key challenges as a Left in the era of Trumpism. For we want to be able to use such an organization to broaden and deepen these brilliant flashes of mass anger against a dismal election, against an authoritarian regime and against a system that we now know, if allowed to continue, will exile us from our own future.

Tithi Bhattacharya is a professor of History and the Director of Global Studies at Purdue University.