Books to imagine possibilities for futures free from wage labor, exploitation and the oppression of global corporate capitalism.

Renowned Italian theorist Franco “Bifo” Berardi describes our current political moment as one of impotence, with political leaders like Donald Trump and Theresa May manipulating our desperation and exploiting our humiliation. To mark the publication of Bifo Berardi’s new book Futurability: The Age of Impotence and the Horizon of Possibility, we present a list of books that imagine possibilities for alternative futures free from wage labor, exploitation and the oppression of global corporate capitalism. 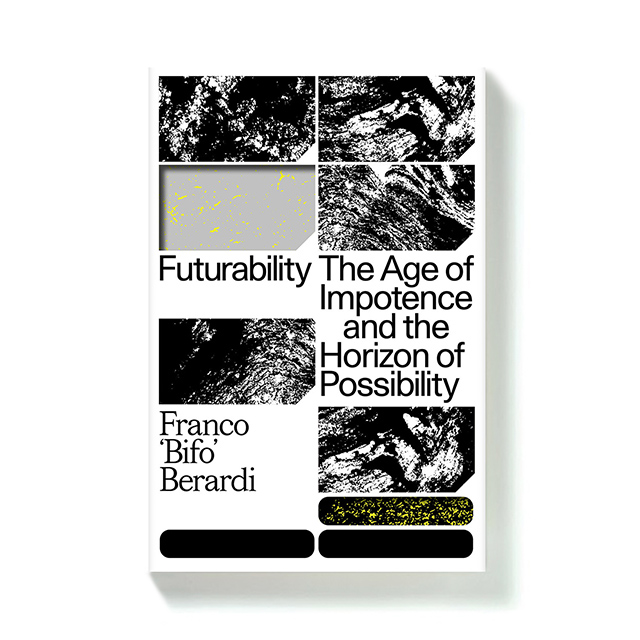 Futurability: The Age of Impotence and the Horizon of Possibility
by Franco “Bifo” Berardi

How can we imagine a new emancipatory vision, capable of challenging the deadlock of the present? Is there still a way to disentangle ourselves from a global order that shapes our politics as well as our imagination?

In this inspired work, renowned Italian theorist Franco Berardi tackles this question through a grounded yet visionary analysis of three concepts fundamental to his understanding of the present: possibility, potency, and power.

Overcoming the temptation to give in to despair or nostalgia, Berardi proposes the notion of ‘futurability’ as a way to remind us that even within the darkness of our current crisis a better world lies dormant. In this volume, Berardi presents the most systematic account to date of his philosophy, making a crucial theoretical contribution to the present and future struggle.

What happened to the public intellectuals that used to challenge and inform us? Who is the Sartre or De Beauvoir of the internet age? General Intellects argues we no longer have such singular figures, but there are, instead, general intellects whose writing could, if read collectively, explain our times. Covering topics such as culture, politics, work, technology, and the Anthropocene, each chapter is a concise account of an individual thinker, providing useful context and connections to the work of the others.

How Will Capitalism End? Essays on a Failing System
by Wolfgang Streeck

“At the heart our era’s deepening crisis there lies a touching faith that capitalism, free markets and democracy go hand in hand. Wolfgang Streeck’s new book deconstructs this myth, exposing the deeply illiberal, irrational, anti-humanist tendencies of contemporary capitalism.” – Yanis Varoufakis, author of And the Weak Suffer What They Must?

Inventing the Future: Postcapitalism and a World Without Work
by Nick Srnicek and Alex Williams

Molecular Red: Theory for the Anthropocene
by McKenzie Wark

“A wonderful book … informative and moving … a great recovery of an instructive life and literary effort. The book makes the case for a kind of political vision and action we need to recognize and enact. A true pleasure to read.”
– Kim Stanley Robinson, author of the Mars Trilogy

Peter Frase argues that increasing automation and a growing scarcity of resources, thanks to climate change, will bring society tumbling down. In Four Futures, Frase imagines how a post-capitalist world might look, deploying tools of both social science and speculative fiction to explore what communism, rentism, socialism and exterminism might actually entail.

In the Long Run We Are All Dead: Keynesianism, Political Economy, and Revolution
by Geoff Mann

“Mann makes it clear that Keynes’s critique of liberalism can be found already in Hegel; and that now we need to leave behind the caution of the great philosopher and the great economist, thus realizing a radical alternative to capitalism. This is a provocative, original and brilliant book.” – Domenico Losurdo, author of Liberalism: A Counter-History

Communal Luxury: The Political Imaginary of the Paris Commune
by Kristin Ross

“In recent years, the Paris Commune has again moved to the center of political thinking. Kristin Ross’s new book now, virtually for the first time, gives us an account of the intellectual antecedents of the Commune as well as its contemporary impact. This is an indispensable text for all current left theory!” – Fredric Jameson

Erik Olin Wright’s major new work is a comprehensive assault on the quietism of contemporary social theory. A systematic reconstruction of the core values and feasible goals for Left theorists and political actors, Envisioning Real Utopias lays the foundations for a set of concrete, emancipatory alternatives to the capitalist system. Characteristically rigorous and engaging, this will become a landmark of social thought for the twenty-first century.

The Next Revolution: Popular Assemblies and the Promise of Direct Democracy
by Murray Bookchin
Edited by Debbie Bookchin and Blair Taylor
Preface by Ursula K. Le Guin

"By far the most sophisticated radical proposal to deal with the creation and collective use of the commons across a variety of scales, and is well worth elaborating as part of the radical anticapitalist agenda.” – David Harvey, author of Rebel Cities

“In this enthralling and exhilarating book, Jodi Dean shows that, contrary to neo-anarchist cliche, the party form and class struggle are very far from being outmoded. The revival of the party has produced a surge of enthusiasm in contemporary left politics—an enthusiasm that Crowds and Party both explains and stokes up.” – Mark Fisher, author of Capitalist Realism

Frames of War: When Is Life Grievable?
by Judith Butler

In this urgent response to violence, racism and increasingly aggressive methods of coercion, Judith Butler explores the media’s portrayal of armed conflict, a process integral to how the West prosecutes its wars. In doing so, she calls for a reconceptualization of the left, one united in opposition and resistance to the illegitimate and arbitrary effects of interventionist military action.

The Exform
by Nicolas Bourriaud
Translated by Erik Butler

Leading theorist and art curator Nicolas Bourriaud tackles the excluded, the disposable and the nature of waste by looking to the future of art—the exform. He argues that the great theoretical battles to come will be fought in the realms of ideology, psychoanalysis and art.

“We can’t do without this book. We are all and have always been Thomas More’s children.”– China Miéville

Last Futures: Nature, Technology, and the End of Architecture
by Douglas Murphy

“Murphy’s chief virtue is the faculty with which he connects the dots between various, seemingly unconnected developments in architecture and theory with the ecological, financial, and military crises of an earlier era, holding a mirror onto our own anxious epoch of globalized precarity labor and anthropogenic climate change.” – Anna Khachiyan, Metropolis Magazine

NASA/TREK: Popular Science and Sex in America
by Constance Penley

“Going into space with NASA/TREK is a good read and a good ride into uncharted regions of technoculture. In Penley’s hands, popular science is a place to launch an inquiry into moral, cultural and political stakes in a world ‘where no man has gone before.’” – Donna Haraway

The essays in this book—some newly written, others gathered from scattered sources—look at the ways in which contemporary science fiction films draw on, rework, and transform established themes and conventions of the genre: the mise-en-scene of future worlds; the myth of masculine mastery of nature; power and authority and their relation to technology.

Alien Zone II presents some of the most exciting new voices in the current debates. A companion volume to Alien Zone, it continues to pursue the critical and theoretical issues opened up in the earlier book and energetically explores fresh territory with an eye which is both reflective and interventionist: visionary cities, psycho-cybernetics, internet fandom, the convergence of science fiction literature and science action film, the body and its limits are just some of the subjects brought under its gaze.

Alternatives to Capitalism: Proposals for a Democratic Economy
by Robin Hahnel and Erik Olin Wright. Introduction by Ed Lewis

“Many recognize that the various forms of ‘really existing capitalism’ have deficiencies that range from harmful to lethal. Few have carefully thought through ‘really existing alternatives’ that offer hope for escape from problems and dilemmas that are profound, and imminent. Robin Hahnel and Erik Olin Wright are two of the most thoughtful and perceptive analysts to have pursued this critically important course. Their reasoned and informed interaction is a major contribution towards clarifying the paths forward.” – Noam Chomsky

Fortunes of Feminism: From State-Managed Capitalism to Neoliberal Crisis
by Nancy Fraser

Nancy Fraser’s major new book traces the feminist movement’s evolution since the 1970s and anticipates a new—radical and egalitarian—phase of feminist thought and action.

“Nancy Fraser is one of the most creative social philosophers and critical theorists of her generation.” – Cornel West

An American Utopia: Dual Power and the Universal Army
by Fredric Jameson. Edited by Slavoj Žižez

Fredric Jameson’s path breaking essay “An American Utopia” radically questions standard leftist notions of what constitutes an emancipated society. Includes responses from philosophers and political and cultural analysts, as well as an epilogue from Jameson himself.

“In An American Utopia, Jameson affirms the critical function of utopian thinking and the efficacies of the form itself. He insists that the fundamental function of utopias is to revive a sense of the future, which requires taking aim at the forces that prevent us from venturing out from the comfortingly familiar confines of the present.” – Kathi Weeks

How can we organize a society that gives us a better chance to be fully alive? How can we reinvent religion so that it liberates us instead of consoling us? These questions stand at the center of Roberto Mangabeira Unger’s The Religion of the Future: an argument for both spiritual and political revolution. It proposes the content of a religion that can survive without faith in a transcendent God or in life after death.

“Excels by depth as well as by a wide-reaching erudition … A powerful work.” – Louis Dupré, Journal of Religion