The 'Gilets Noirs': The Undocumented Migrant Movement in France

With France marking six months of ‘yellow vest’ rallies and civil unrest, a new movement is making itself heard. The Gilets Noirs, the largest collective of undocumented migrants in France, have been conducting a series of high profile actions, most notbaly the recent protests at Charles De Gaulle airport calling for an end to deportation flights. In this article, Luke Butterly reports on the movement.

As France marks six months of ‘yellow vest’ rallies and civil unrest, a new movement is making itself heard.

The ‘gilets noirs’ describe themselves as the largest collective of undocumented migrants in France. They are calling out the multiple injustices of living through France’s asylum and immigration system, including homelessness, lack of work, police repression, deportations, and detention. And they are putting forward their solution: to be granted residency to legally live and work in France.

So named because “the vest is our face, and it represents the racism in France”, the group’s latest high profile action was the occupation of part of Charles De Gaulle in Paris, the nation’s largest airport.

Several hundred undocumented migrants and their supporters assembled at the airport, demanding to speak with the CEO of Air France and the French Prime Minister Édouard Philippe.

The protestors acted peacefully, and were met with tear gas from the police. Protesters chanted and gave speeches until a delegation was met by representatives from Air France.

The group called for an end to deportations, in particular those facilitated by the national airline - who they insisted should “stop any financial, logistical or political participation in deportations”. 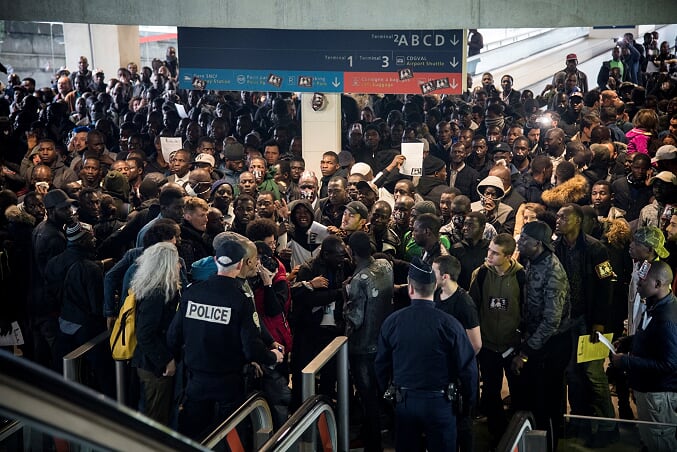 Speaking from Paris, Ahmed Abdul Karem, a Sudanese refugee said gilet noirs like him were tired of waiting for their human rights to be respected.

“We don’t have anywhere to sleep. We don’t have work. We are waiting five, six months for a place to sleep. We are sleeping on the street. Nobody listens, so that is why we went to the airport – it forced people to see us and acknowledge our rights.

“We are refugees and migrants. We are vulnerable. We don’t have anything, we don’t have our families here. We just know one thing – we have rights and we are ready to do what it takes it to fulfil these rights.

“We lost our families in the wars, in the streets; we don’t have anything to lose. We are not afraid of anything – even of the jail. Because we have seen worse.”

The airport was not a mere symbolic setting, but was chosen as it represents the ‘front line in the war against immigrants’. The particular terminal was targeted as it hosts the main office of Air France, and because it mostly serves internal EU flights.

Many undocumented migrants living in France are under threat of being removed under the EU’s ‘Dublin regulations’ to other member states (where their fingerprints were first taken), or are prevented by these same laws from leaving France and moving to countries such as the UK, where people may already have family or other ties.

Activists said they wanted to highlight the disparity between the ease in which EU citizens can travel compared to those protesting, who are only normally allowed in that terminal when they are working as cleaners or baggage handlers.

They called on all staff and passengers to oppose deportations, and called for an end to reprisals against those who do resist. Recent years have seen a Europe-wide trend of criminalising migrant solidarity, including the conviction of anti-deportation activist Elin Ersson for violating aviation law in Sweden, the trial of the ‘Stansted 15’ in the UK, and search and rescue teams in the Mediterranean. 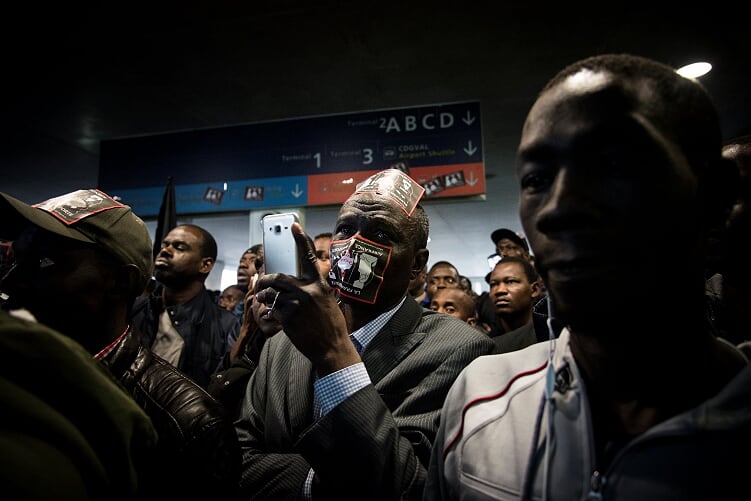 The group also highlighted the poor conditions faced by migrants in the country, including how many are forced to sleep rough in the streets of the capital and other cities, and how even those with accommodation in foyers - purpose built refugee accommodation – endure poor conditions and can share a single room with up to seven people.

Several thousand migrants live on the streets of the capital and the surrounding region. Between 30% and 40% of asylum claims in France are registered in the greater Paris region, and 2018 saw a 45% increase in applications. Yet the French state does not provide nearly enough resources as is, and last summer the Parisian authorities cleared many of the makeshift camps.

One third of the over 16,000 people living in settlements in France are in the Greater Paris region, with more than a quarter of those being children. Local and international human rights organisations have criticised the government for its failings, and the UN housing envoy Leilani Farha recently condemned the situation.

“Many migrants and asylum seekers with whom I spoke explained that they fled to France in part because it is the birthplace of human rights, and yet after arrival in the country they struggle to have their fundamental rights recognized and implemented” she said.

Abdul Karem echoed Farha’s point: “In Africa, everyone told us there was human rights. But when we got here, we were shocked, it is the exact opposite of human rights.”

Detained Voices have translated the statement by the ‘gilets noirs’ here.

The situation has further deteriorated in recent months. France's parliament signed into law a controversial asylum and immigration bill last August. Critics say that the new French law limits the scope of asylum cases, speeds up deportations, and extends the maximum duration a person could be detained from 45 to 90 days.

In a leaflet handed out at the airport, the protesters claimed that more than 1,000 people have been deported from the nearby immigration detention center in Mesnil-Amelot last year. France’s detention centres have been repeatedly criticized; a 2018 inspection of centres, including Mesnil-Amelot, found poor housing conditions and a lack of access to medical care.

A prominent commentator described these as having gone further than any post-war government in restricting migrant rights. They are being introduced in the wider context of a permanent state of emergency, increased police powers, restricted judicial oversight, and the centrist authoritarianism of President Emmanuel Macron.

For Malcolm and Rosa, activists with La Chappelle Debout, the effect on the ground of the new asylum law had been dire. They claimed it sought to enshrine the ‘good migrant/bad migrant’ dichotomy favoured by governments in to law, such as by preventing someone who had been refused asylum to apply to stay in the country on other grounds (such as health).

“Everything that you can use to fight back and [try be successful in your asylum case], the law now prevents you from finding a solution” said Malcolm.

The gilets noirs have staged other actions in recent months, such as at the Comédie-Française, one of France’s most important theatres. But the protest at Charles De Gaulle was a step up, the first move “in a campaign of anger and rage” and “an attack on all who exploit and profit from the undocumented”.

Protesters are now waiting for a meeting with Anne Rigail, CEO of Air France, which has been agreed by authorities on the back of their action. They said they would continue staging protests until the Prime Minister granted the gilets noirs their residency status.

And Abdul Karem said if they did not receive an answer promptly, they would act again.

He said they were sending a message to the whole of the EU: “Refugees have to be treated well, like human beings. Europe is the reason for the problems in Africa. Europe takes advantage of Africa. We are here just to survive, and yet we are not treated like human beings.”

Luke Butterly is an Irish writer living in London.