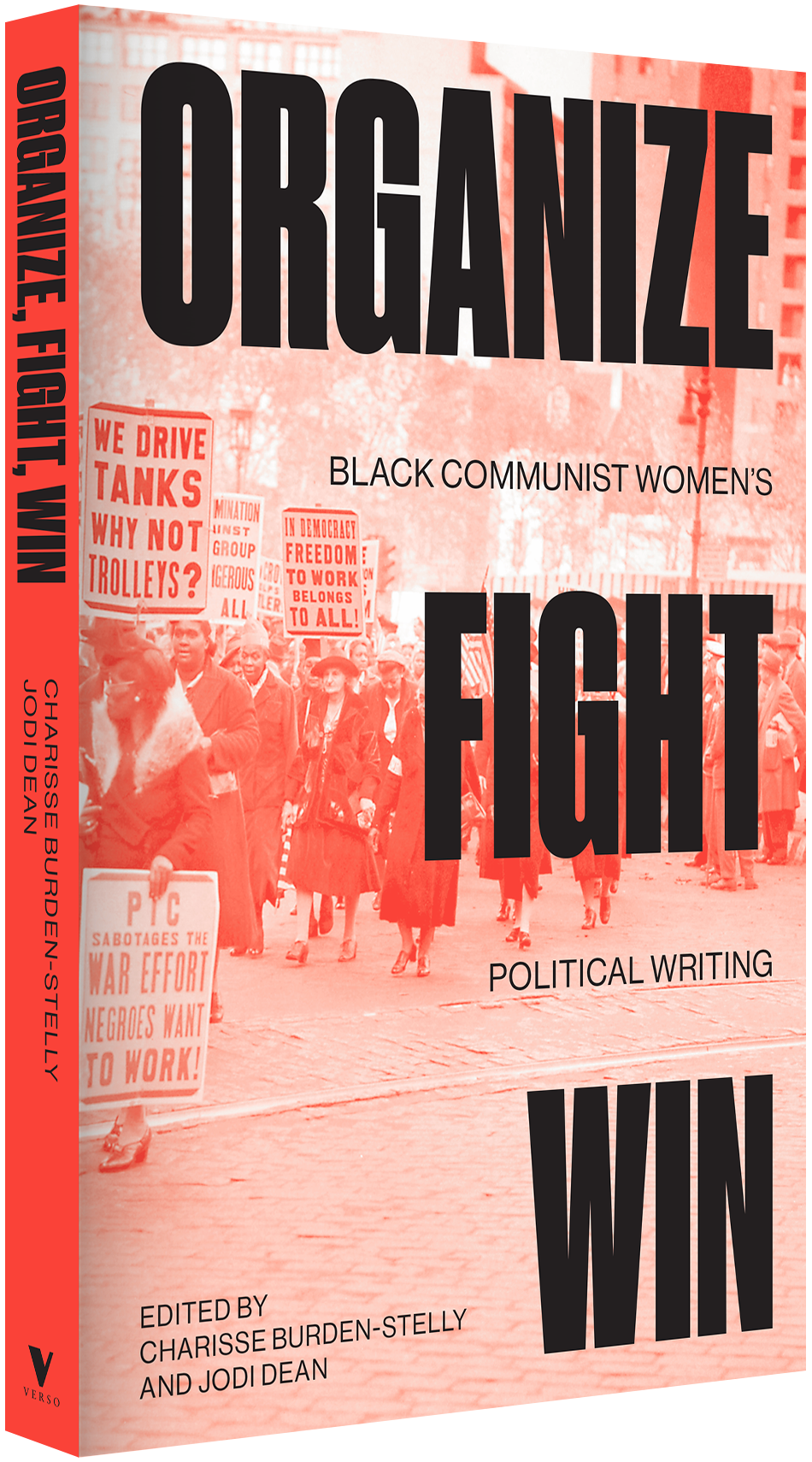 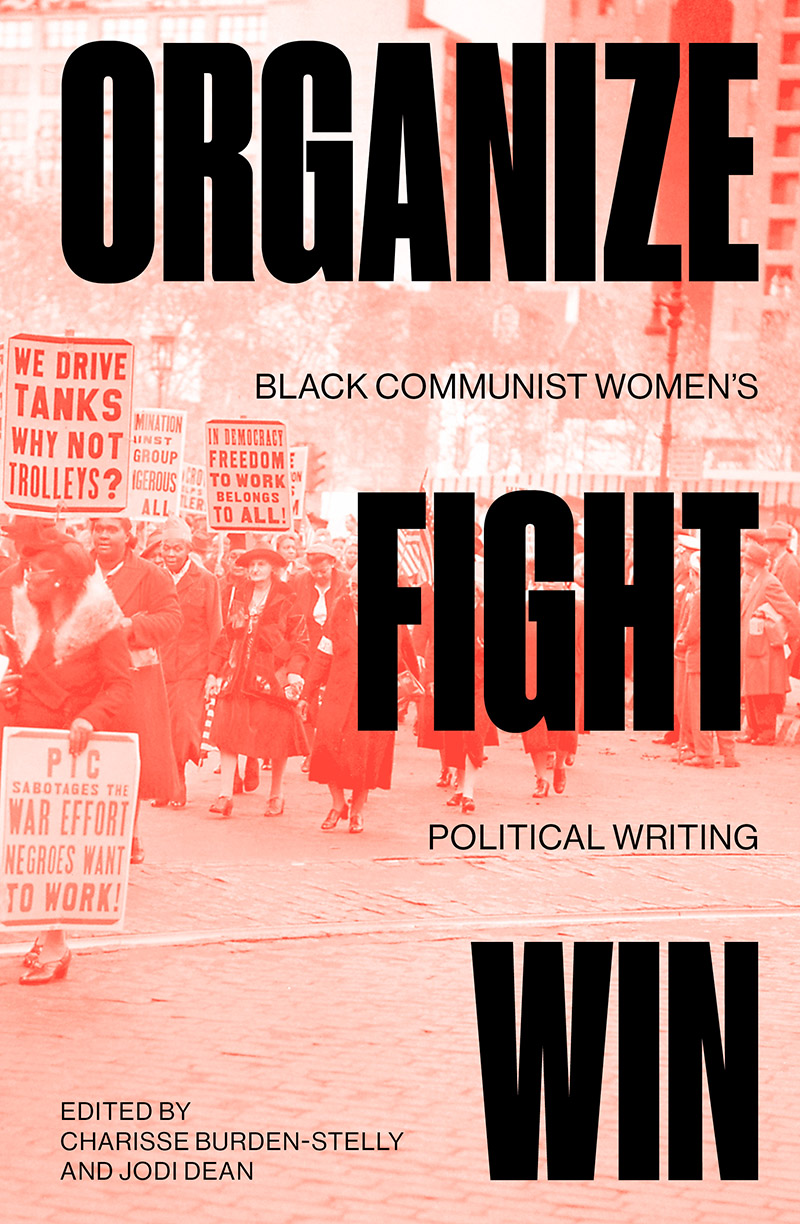 The first collection of the writing of Black communist women.

Black Communist women throughout the early to mid-twentieth century fought for and led mass campaigns in the service of building collective power in the fight for liberation. Through concrete materialist analysis of the conditions of Black workers, these women argued that racial and economic equality can only be achieved by overthrowing capitalism.

The first collection of its kind, Organize, Fight, Win brings together three decades of Black Communist women’s political writings. In doing so, it highlights the link between Communism and Black liberation. Likewise, it makes clear how Black women fundamentally shaped, and were shaped by, Communist praxis in the twentieth century.

“Charisse Burden-Stelly is a sharp engaged radical thinker, representing the best of the Black radical tradition. Along with co-editor Jodi Dean, Burden-Stelly has curated a powerful and enormously valuable collection of writings by Black socialist and communist women, rightly placing their voices at the center of U.S. and international left histories. A great teaching tool and a much needed source of inspiration for contemporary activists.”

“The women whose voices are collected in Organize, Fight, Win are some of the principal radical thinkers and activists of the 20th century making this collection a must-read for researchers, teachers, and students of freedom struggles. Burden-Stelly and Dean have brought together some of the most significant women in the struggles for equality and their essential contribution to theorizing emancipation, including anticipating how we understand intersectionality and its relevance to political organization. These sources are an important corrective to the history of the Black Freedom Struggle and the women’s rights movement putting radical Black women at the forefront of those histories.”

“In this brilliantly curated anthology, Burden-Stelly and Dean celebrate the voices of Black and communist women whose struggles against capitalism were confluential with their struggles against sexism and white supremacy. The thoughtful collection of articles, reports, proclamations, and personal reflections provides an invaluable glimpse of the essential political role that Black women played between 1919 and 1956, an era which encompassed the first Red Scare, the Great Depression, the Spanish Civil War, World War II, and the second Red Scare instigated by the House Un-American Activities Committee and Joseph R. McCarthy. Organize, Fight, Win reminds us that anticommunism remains a key ideological bludgeon of American white supremacists to this day and provides relevant theoretical tools for continued resistance.”

“Charisse Burden-Stelly and Jodi Dean have assembled a fascinating archive of writings by Black women in and around the CPUSA. These militants provide us with an important model for how to be anticapitalist, antiracist, antisexist, anti-imperialist, and antimilitarist all at once.”

“This is an essential and beautifully curated collection that provides an important foundation for understanding the Black radical tradition.”

“Burden-Stelly and Dean have compiled a unique, much-needed volume on the lives and thought of black women communists. The voices of Williana Burroughs, Louise Thompson Patterson, Thyra Edwards, Lorraine Hansberry and many others ring out here, resonating with rich historical insights and political inspiration. Organize, Fight, Win is a proper tonic against those who mischaracterize and impugn left anti-capitalist struggle as some whites-only political project.”

“This is an essential and beautifully curated collection that provides an important foundation for understanding the Black radical tradition.”

“This book returns the voices of Black women Communists to their rightful place in histories of labor, race, and gender in the 20th century. Libraries serving historians or general readers interested in Black women's history and activism need to add this to their shelves.”

“This book returns the voices of Black women Communists to their rightful place in histories of labor, race, and gender in the 20th century. Libraries serving historians or general readers interested in Black women's history and activism need to add this to their shelves.”

“In their new collection Organize, Fight, Win, which gathers the writings of Black Communist women starting in the 1920s, Jodi Dean and Charisse Burden-Stelly provide a genealogy for the strains of Black feminism that emerged as part of the radicalization of the 1960s.”

“In this groundbreaking collection, Burden-Stelly and Dean have compiled a treasure trove of historical, political and seminal writings about Communism from Black women's perspectives. Includes pieces by Claudia Jones, Charlotta Bass, Alice Childress, Dorothy Burnham and so many more.”

“Organize, Fight, Win brings to light to the theories and tactics activists used to build successful coalition movements at the beginning of the 20th century, and their enduring relevance in today’s political climate.”

“This text is an important addition to the history of the United States, especially as regards the struggle for Black residents' freedom and equality. The fact that all of the work included in this book is written by communists is also important in that it proves the important role they played in the struggle during the period represented. However, more than just a look at that legacy, Organize, Fight, Win is also a working textbook for the current and future state of the fight for liberation and against the economic system of capitalism; a system that is the basis of most every other oppression, especially those targeting Black and Brown people.”

“[Organize, Fight, Win] confounds decades of obfuscation and contemporary misconceptions, uncovering a hidden history of black women's leadership of and struggle within communist parties and movements in the twentieth century. Debates around theory and strategy take on a new vibrancy in these writings and paint a picture of left-wing party building that challenges stale caricature.”

Our end of year highlights: 40% off all print books and 60% off all ebooks until January 2.

Charisse Burden-Stelly and Jodi Dean introduce Claudia Jone's essay, "An End to the Neglect of the Problems of the Negro Woman!,” an essay that extends and complements the crucial and hard-to-access writings collected in Organize, Fight, Win.