40% off EVERYTHING!
about 1 month left
Luke Butterly
comments

The gilets noirs occupy the Panthéon

This weekend the gilets noirs, a movement of France's undocumented migrants, occupied the Panthéon in Paris. In this article, Luke Butterly reports on the occupation, the police repression against the occupiers, and the aims of the movement.

As Paris prepared for the annual Bastille Day celebrations, and its anticipated gilets jaunes protests, the capital made the news for different reasons. Rather than the gilets jaunes it was the gilets noirs that hit the headlines by occupying the Pantheon - the final resting place of many of France’s most famous citizens, from Voltaire to Maire Curie.

The gilets noirs, the movement of undocumented migrants who have been building their campaign for the past few months, have been calling for a meeting with the French Prime Minister Édouard Philippe. They want him to grant them ‘papers’, the documents that would regularise their immigration status, giving them the right to live and work in France.

The first call came, loudly, in May. A group of several hundred gilets noirs occupied a terminal of Paris’s Charles De Gaulle airport, focusing their anger on Air France, ‘the official deporter of the French state’.

In June, the headquarters of the cleaning and catering multinational Elior were occupied. The gilets noirs accused the company of exploiting undocumented migrant employees by using their insecure legal status to make them work in poor conditions and withholding pay.

As their profile grows, the movement has been gaining support. A solidarity action at the recent Paris Pride parade saw a ‘dykes against deportation’ group challenge the presence of the Air France float, stating there was ‘no pride in deportations’. An open letter supporting the gilets noirs was published by the Libération newspaper and signed by dozens of French celebrities, including the actor Juliette Binoche. Danièle Obono, an MP for La France Insoumise, delivered a letter from the group to the Prime Minister last month.

Yet their calls have gone unanswered and, tired of waiting, they struck again.

Occupation of the Pantheon

At midday on Friday around 600 gilets noirs activists and supporters occupied the Pantheon. They handed out leaflets explaining their action, stating:

"We are the undocumented, voiceless, faceless for the French republic. We come to the graves of your great citizens to denounce your irreverence [and]...to demand the Prime Minister give papers to all undocumented migrants in France."

Staff and visitors were quickly cleared out, and journalists reported from outside that the building was sealed off, even to the press, with tourists were being directed away.

As police reinforcements arrived, other undocumented migrants, politicians and celebrities sent in messages of solidarity. Esther Benbassa, a Senator for the Green party, gave supportive interviews to the press outside and noted that migrants like Marie Curie were among those honoured at the Pantheon.

One of the protestor’s first demands was access to toilets and water. As a speaker from the gilets noirs pointed out, this request has added significance for the many migrants who have to sleep on the streets in France and are denied these basic rights each day.

In their statement, they listed their reasons for their occupation: to obtain their rights not by begging but through struggle; that, while there are 200,000 empty dwellings in Paris, they have to live on the streets; to protest police repression; and to demand the release of their comrades from detention centres. Yet, their demands weren’t merely for immediate reforms. As with their previous protests, they were also critical of the structural issues that cut to the heart of French society.

As they stated, the reality of living in “France for foreigners is humiliation, exploitation, deportation”, far from the ideals of the French republic of liberty, equality, and brotherhood.

They stated their fight was not merely to get 'papers' - the immigration documents to be able to work and live without fear of repression - but was against the very system that creates undocumented people.

Connections were also drawn between the situation of undocumented migrants, the historic “relationship” between France and its former colonies, and the ongoing “pillaging” by French companies of the resources of the African continent. “France continues slavery through other means,” their statement read.

Police repression and the end of the occupation

Diakité, a member of the gilets noirs, told me that the group had negotiated with the police that if they left the building they would be free to leave the area unmolested – they would undergo no identity controls nor face any aggression.

Yet, any such agreement was not kept and the gilets noirs found themselves cordoned by the police once they left the building. They attempted to hold a ‘general assembly’ outside, but were met with mounting police repressions. The police started to snatch people out of the crowd; soon, six gilets noirs were arrested, with the number rising throughout the evening. 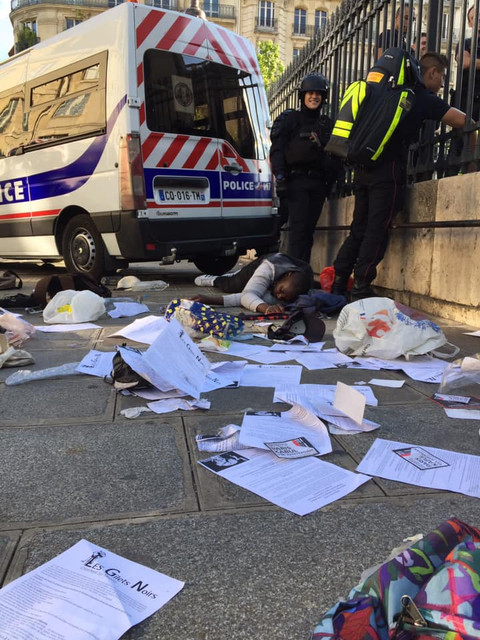 The police charged the crowd several times, and dozens of people were taken into care by medics and the fire service. Images circulated online of smiling police officers standing over injured protestors, the ground strewn with their leaflets demanding dignity.

Journalists on the scene documented the level of violence, with one noting that people were being ‘treated like cattle’. Footage showed a photographer for the left-leaning daily Liberation being assaulted by the police, which the paper confirmed in their reporting of the day, as he took a photo of two men being violently arrested.

An activist with the group told me that the police were clearly only targeting black people in the group for arrest. The police later posted on twitter that “as a result of identity checks”, 37 people were arrested.

The response from the state at this event was markedly more violent than at their previous actions, the eyes of the world’s press seemingly posing as no restraint or deterrent. However, the gilets noirs made clear that this kind of repression is nothing new.

When I spoke with the group last month, they remarked that engaging in a peaceful but illegal protest is no riskier than simply taking the metro to work – both can see you arrested by the police and locked up in a detention centre.

“The reality of what happened yesterday, the whole world has seen what the French state and the police are capable of doing to people to the undocumented in this country.” Diakité told me.

“They talk the whole time about the racism of other countries, but they never talk about what they are themselves capable of. On Friday, the people who were present saw what they were capable of – the proof. ….”

We’re here because you were there

The French Prime Minister took to twitter, making his first acknowledgment of the gilets noirs, to say: “France is a state of law, in all that this entails: respect for the rules that apply to the right to reside, respect for public monuments and the memory they represent.”

While there was resounding silence concerning the police brutality, various political figures from the country’s centre to far-right were quick to denounce the peaceful direct action.

A recurring theme was about the lack of ‘respect’ shown to a monument that holds national significance. Yet national monuments and national memories can and do (or can be made to) either represent the status quo, or a challenge to that very authority.

Activists handed out a leaflet listing the many ‘great citizens’ buried in the Pantheon who had lived and died fighting against injustice. Victor Hugo, Jean Moulin and other resistance fighters, anti-colonial thinker Aimé Césaire, who would have, they said, “without doubt support the cause of the undocumented.”

“Our fathers died for France,” the gilets noirs said in their statement, invoking the countless conscripted African soldiers made defend France in the two world wars, France’s role in the slave trade and its brutal colonial history, the migrant workers who rebuilt the country in the post-war era, among other unpaid debts.

As activists gathered outside of a police station on Saturday, demanding the release of their comrades. "D", a member of the gilets noirs who wished to remain anonymous, echoing Sivanandan, said:

"This is our home. The only crime of those arrested is to have been born outside France. If we are here it is because France colonised our countries."

“Our rage and our unity are only increased”

On Bastille Day, as the police turned their attention to the gilets jaunes by firing tear-gas at protesters during following the annual military parade, gilets noirs activists and supporters were busy working to secure their comrades’ freedom.

While many of those arrested on Friday had been released without charge, nineteen gilets noirs activists are currently being held in a detention centre. Their supporters are working with lawyers for the upcoming court dates early this week, and fundraising to cover legal costs.

Despite the uphill battle, the group have maintained a defiant stance, stating over the weekend: "They thought we would divide us by their repression ... but our rage and our unity are only increased!"

Luke Butterly is an Irish writer living in London.